It was a tough loss in a crazy atmosphere at TCO but the Lakers need to turn the page quickly to an important matchup with the Lightning on Wednesday.

The Lakeville North defense forced four turnovers including an interception returned for a touchdown as the top-ranked Panthers defeated the Prior Lake Lakers 38-3 Oct 12 at TCO Stadium in Eagan.

Despite the final score, the game started on a high note for the Lakers. After getting a pair of first downs, the Lakers were forced to punt but the punted ball bounced off the back of a Panther player and safety Nick Larson jumped on it to give Prior Lake the ball at the Panther 25-yard line.

Prior Lake did not pick up a first down on the next three plays but kicker Mike Nelson connected on a 35-yard field goal to put the Lakers up 3-0 early for their only lead of the game.

The Lakers had a chance to capitalize again quickly as Lakeville North running back Brian Curtis Jr. fumbled on the Panthers first play of the ensuing drive, setting the Lakers up already in Lakeville North territory at the 36-yard line.

However, quarterback Colin O’Connor tried to throw a deep pass to cornerback/wide receiver Jackyse Jacox on the ensuing play but the ball was intercepted by dual-threat athlete Raja Nelson.

A few plays later, Lakeville North quarterback Brennan Kuebler connected with Nelson on a long pass, getting the Panthers all the way down to the Laker 21-yard line. Thankfully for the Lakers, the Prior Lake defense held from that point and Lakeville North missed a long field goal, keeping the 3-0 lead intact for the time being.

The Laker offense then went three-and-out and punted and a couple plays after that, Nelson broke off a 51-yard touchdown run to put the Panthers on top 7-3 with 3:40 to go in the first quarter.

Two plays after the kickoff, O’Connor took the snap, dropped back and tried to throw a swing pass to running back/linebacker Spencer Shaver but Lakeville North defensive end Eli Mostaert jumped in and picked off the ball, returning it all the way into the end zone for another Panther touchdown, making the score 14-3 Panthers with 3:25 to go in the first quarter.

Both teams traded stops on the next few possessions. Prior Lake had good field position early in the second quarter thanks to a long punt return by Jacox but the Lakers were ultimately stopped on fourth down and turned the ball back over to the Panthers.

The Panthers got the ball past midfield on their next drive but the threat ended after an incomplete pass on a fake punt.

O’Connor then completed a long pass to wide receiver Parker Ellis and it looked like Prior Lake may be in business at the Panther 27-yard line but the drive came to a halt a few plays later due to a holding call and a snap over O’Connor’s head that the Panthers recovered.

Lakeville North made one of the key plays of the night on the ensuing snap. Kuebler faked a handoff to Nelson and fired deep downfield, connecting with one of his receivers at the 10-yard line, who could not be brought down until the 1-yard line. Nelson ran the ball into the end zone on the next play, extending the Panther lead to 21-3 with 4:57 to go before halftime.

After the kickoff, O’Connor threw another interception, this time trying to find receiver Spencer Marlier to his left. The Panther defender stepped right in front of the pass and returned it to the Laker 10-yard line.

The Laker defense stood tall however, holding the Panthers to a field goal, making the score 24-3 with 2:33 to go in the half.

The Laker offense went three-and-out in their next possession but got the ball back one more time before halftime after Kuebler tried to throw a deep pass with under a minute to go that was intercepted by Jacox near the Laker goal line. Jacox returned the ball all the way to the Panther 35-yard line, giving the Lakers an opportunity for points in the closing seconds of the half. However, O’Connor’s last heave fell incomplete as the score stayed 24-3 at halftime.

Neither team could muster any offense on their first drive of the half but when they got the ball back, the Panthers put together a methodical 8-play 55-yard drive capped by a Curtis 11-yard touchdown run to push the lead to 31-3 with 4:57 to go in the third quarter.

The Lakers went three-and-out on the next drive and the Panthers delivered the dagger on the ensuing play. Kuebler took the snap and tossed it to Curtis, who instead of running the ball, launched it deep to Nelson, connecting with him in stride for a 50-yard touchdown to make the score 38-3 and effectively ending the game.

Statistically, O’Connor completed 10 of 39 passes for 78 yards and three interceptions.

Defensively, linebacker Noah Benson led the Lakers in tackles with 11, while linebacker Michael Herbst and safety Austin Gordon each had 10.

The Lakers will look to get back on the winning track when they host Eastview on senior night Oct. 17. (Note: It is a Wednesday game due to MEA).

The Lightning (3-4) are coming off a 45-0 win over Eagan in Week 7. In the two weeks prior to that, Eastview had close losses to traditionally strong programs, 17-14 to Wayzata in Week 6 and Rosemount 13-9 in Week 5. Eastview’s other two wins on the season came 20-0 against Burnsville in Week 2 and Shakopee 17-7 in Week 3.

Eastview is led offensively by running back Quintcy Suggs, who has rushed for 489 yards on 94 carries and two touchdowns.

The Lightning also bolster a passing attack, led by quarterback Erik Reimann, who has completed 92 of his 161 passes for 1,148 yards with five touchdowns and four interceptions this season.

Reimann’s top target is wide receiver Larry Wright, who has 28 catches for 435 yards and two touchdowns.

The Lakers beat the Lightning 27-7 at Eastview High School in 2017 to claim the Metro South District Championship.

With a win, the Lakers would likely lock up at least a #3 seed in the playoffs, which would mean a first round home game at Dan Patch Stadium. The Lakers could potentially be seeded as high as a #2 seed depending on how Rosemount does against Shakopee Wednesday night as the Irish currently only have two losses while Prior Lake has three losses.

With a Prior Lake loss, the Lakers would likely drop to a #4 seed at best as Prior Lake and Eastview would finish with identical 4-4 records and Eastview will own the head-to-head matchup. A #4 seed would still get a first round home game but the path to state would likely be more difficult.

With all this said, the seeding itself is strictly decided by a coaches vote which will occur on Thursday morning so everything depends on how they value each team.

Once the section seeds are voted on and decided by the coaches, they are then sent to the Minnesota State High School League to be entered into one of the four available randomly-picked 31-team brackets.

Those brackets place one team from each of the four sections in a “pod” as it has been referred to in years past, meaning the Lakers could not play a team from their own section until the state quarterfinals.

The full bracket will be released sometime during the day on Thursday. Be sure to check social media for those details when they become available.

Kickoff against Eastview on Wednesday is scheduled for 7 p.m. at Dan Patch Stadium.

Be sure to check back next week for a recap of the Eastview game and preview of the Round 1 matchup. 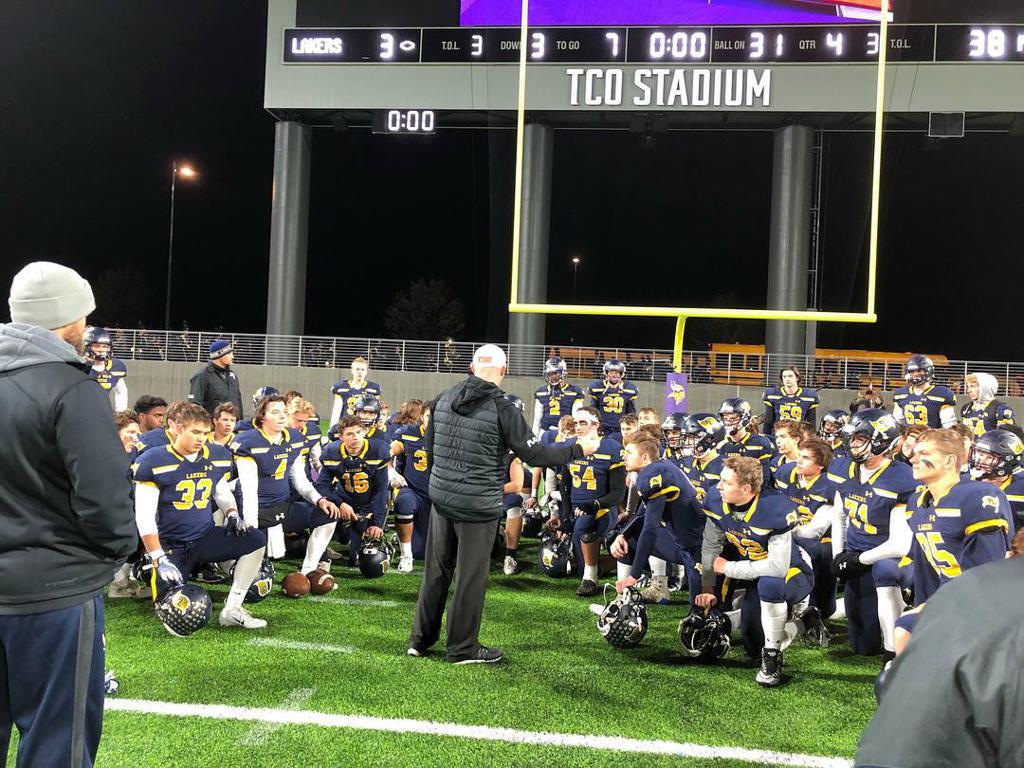