Prior Lake couldn't hold onto a second half lead against the undefeated Irish. The Lakers will look to bounce back against Park in the regular season finale.

Prior Lake led 17-12 at the end of the third quarter but couldn’t hold on as the Rosemount Irish defeated the Prior Lake Lakers 27-17 on October 14 at Rosemount High School.

On the fourth possession, the Irish got on the board first thanks to a 7-yard touchdown run by Rosemount quarterback Landon Danner. The extra point attempt was missed and the Irish held a 6-0 lead with 2:27 left in the first quarter.

Prior Lake answered right back with a 13-play 62-yard drive, highlighted by a 16-yard completion from quarterback Luke Crosby to receiver/running back Joey Krouse, who juked out multiple Irish defenders and picked up a key first down. The drive was capped off by a 2-yard touchdown run by running back Grayson Spronk on a toss play facing fourth-and-goal at the 2-yard line. Kicker Logan Lehrer’s extra point attempt was good to give the Lakers a 7-6 lead with 9:15 left in the second quarter.

The Laker defense then forced a three-and-out and a short punt set the Lakers up with good field position at the Irish 37-yard line.

A strong 22-yard run by Spronk moved the ball inside the Rosemount 10-yard line and a few plays later, Spronk scored on the same toss play as the first touchdown to give Prior Lake a 14-6 lead with 5:05 left in the first half.

Rosemount got the ball on their own 39-yard line in the closing minute of the half and on the first play connected on a seam route down the middle of the field for a 33-yard gain and then scored on a 28-yard touchdown pass on the next play. The Irish opted to go for two and were unsuccessful, making the score 14-12 Lakers at halftime.

The Prior Lake defense forced a three-and-out on the first possession of the second half behind a key sack by defensive lineman Martin Owusu.

On the ensuing possession, the Lakers got a key fouth-and-2 conversion on a run by running back Levi Eiter and a third down conversion by receiver Nate Bodine, who broke a tackle and stayed on his feet to move the chains. The drive ultimately ended in a 26-yard field goal by Lehrer to increase the Laker lead to 17-12 halfway through the third quarter.

The Irish put together a drive deep into Prior Lake territory as the clock ticked into the fourth quarter but the threat was stopped when safety Drew Hammerstrom dove in front of a Rosemount receiver and intercepted the ball to give possession back to the Lakers.

Prior Lake picked up a pair of first downs. Then, facing a fourth down-and-one at their own 44-yard line the Lakers opted to go for it. After an unsuccessful hard count attempt and a timeout, Crosby lined up under center, took the snap, and lunged forward on a quarterback sneak. The officials spotted the ball and brought out the chains to measure, ultimately ruling that Crosby had come up short and turned the ball over on downs.

Four plays later, Rosemount connected on a 33-yard touchdown pass to take an 18-17 lead and a successful two-point conversion made the score 20-17 Irish with 4:27 left in regulation.

The Lakers moved the ball near midfield on the next drive but the possession came to a sudden end when Crosby threw deep down the middle of the field toward Bodine but the ball was intercepted by the Rosemount defensive back.

A long quarterback run advanced the ball near midfield on the very next play and then the Irish scored on a 22-yard run later in the drive to take a 27-17 lead with 1:12 left.

Prior Lake had one final opportunity on the next drive but a fourth down completion from Crosby to receiver/defensive back Jake Fier came up two yards short to seal the Irish 27-17 victory.

Statistically, Crosby completed 9 of 16 passes for 62 yards and an interception.

Spronk was the leading rusher with 16 carries for 83 yards and two touchdowns. Eiter had 10 carries for 46 yards.

Linebacker Aidan Gegenheimer led the Lakers in tackles with nine, while Owusu had seven tackles and a sack.

The Lakers will travel to take on the Park of Cottage Grove Wolfpack on Thursday Oct. 20 at Park High School at 1pm.

The game will be Prior Lake’s final game of the regular season before Class 6A playoffs begin Friday October 28.

The Lakers defeated the Wolfpack 56-21 in Week 8 of last season at Dan Patch Stadium.

This season, Park (3-4 Overall, 2-3 Metro Maroon South) has wins over Eastview, Hopkins and Anoka and losses to Lakeville South, Eagan, Burnsville and Woodbury.

The Wolfpack are highlighted by a high-powered offense, averaging 26.9 points per game.

Park, with their spread no-huddle style offense, are led by quarterback Sam Berrey, who has completed 89 of 157 passes for 14 touchdowns and six interceptions on the season.

Running back Derrik Brown Jr. has been outstanding in the running game for the Wolfpack, rushing for 688 yards and six touchdowns on 112 carries.

Receiver David Ola-Kazeem is the leading receiver for the Wolfpack with 37 catches for 448 yards and five touchdowns. Receiver OT Omot has 29 catches for 589 yards and seven touchdowns this season as well.

Playoff seeding will take place by a coaches vote on Friday morning.

Usually seeding would take place on Thursday but has been pushed to Friday due to 6A games (including Prior Lake's) needing to be played on Thursday because of the official shortage.

As it stands right now, Prior Lake could likely be seeded anywhere from #1 seed to the #4 seed depending on the outcome of the remaining games involving Section 6AAAAAA teams. A top 4 seed would mean a first-round home game.

Once the section seeds are voted on and decided by the coaches, they are then sent to the Minnesota State High School League to be entered into one of the four available randomly-picked 32-team brackets.

Those brackets place one team from each of the four sections in a “pod” as it has been referred to in years past for the first two rounds of the playoffs, meaning the Lakers could not play a team from their own section until the third round/state quarterfinals.

KARE 11 will be revealing the full bracket live on Friday October 21 at 10am.

Be sure to check social media for the full bracket and further playoff details sometime on Friday October 21.

Kickoff at Park High School on Thursday is scheduled for 1pm.

Park will be streaming Thursday’s game on NSPN (formerly Prep Spotlight) at the following link (Note: There is a fee to watch):

Be sure to check back next week for a recap of the Park game as well as a preview of the playoff matchup. 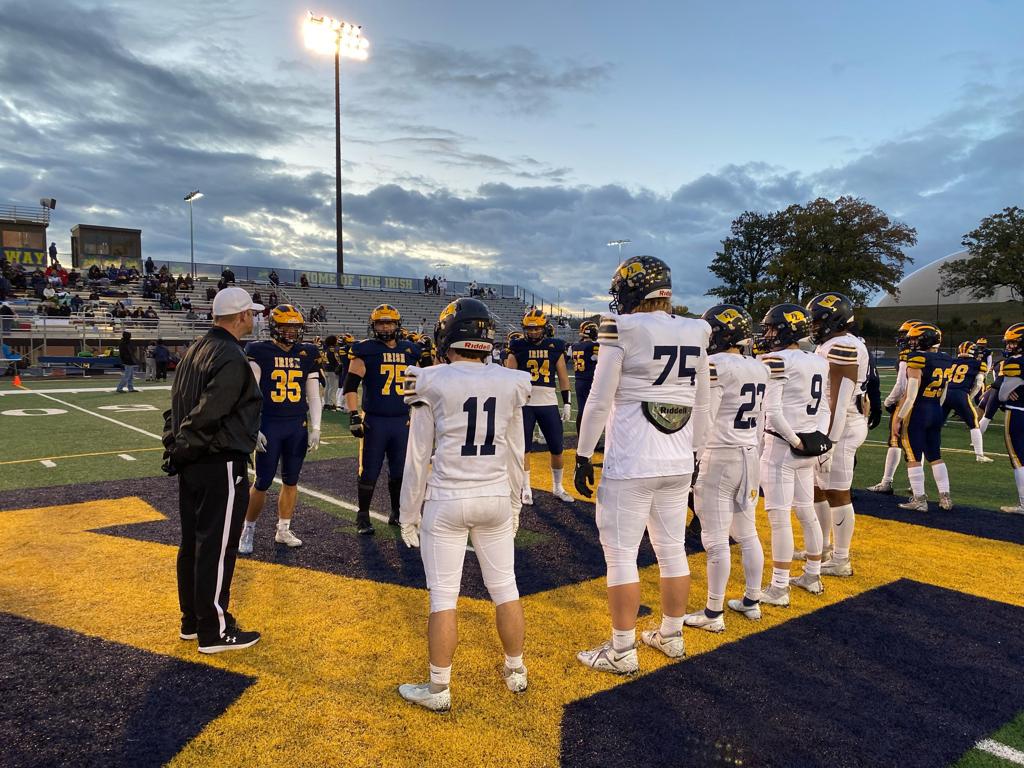