Lakers roll past Park, to open playoffs at East Ridge

Prior Lake cruised by the Wolfpack; to start playoffs on the road for the first time since 2009.

Running back Daveon McMillan rushed for 137 yards and two touchdowns as the Prior Lake Lakers cruised to a 56-21 win over the Park of Cottage Grove Wolfpack Oct. 20 at Dan Patch Stadium.

Prior Lake struck quickly on their first drive of the game. Facing first-and-10 near midfield, quarterback Kyle Haas dropped back and threw the ball deep to his left where receiver/running back Joey Krouse hauled in the pass near the 20-yard line, broke a tackle and scampered into the end zone. Kicker Logan Lehrer’s extra point gave the Lakers a 7-0 lead less than two minutes into the game.

Two plays after the ensuing kickoff, the Prior Lake defense got the ball back on a turnover. A Park receiver caught the ball over the middle of the field but safety Carter Berggren punched the ball out and linebacker Aidan McGowan jumped on the fumble to set the Lakers up at the Park 30-yard line.

A 12-yard run by running back Grayson Spronk advanced the ball deeper into Wolfpack territory and running back Ryan Horejsi finished off the drive a few plays later with a 1-yard touchdown run, giving Prior Lake a 14-0 lead with 7:29 to go in the first quarter.

The Laker defense forced a three-and-out on the next drive and a short punt gave Prior Lake the ball back near midfield.

A pair of double-digit runs by Spronk and Haas moved the ball to the Wolfpack 29-yard line before Krouse took the ball on a toss play and followed left tackle Greg Johnson around the edge. Johnson de-cleated a Wolfpack defensive back along the way and Krouse galloped into the end zone for another Laker touchdown, increasing the lead to 21-0 with 4:32 left in the opening quarter.

Park would answer on the ensuing drive with a 36-yard touchdown pass to trim the Prior Lake lead back to 21-7 with 3:10 left in the first quarter.

The Lakers then put together a methodical 10-play 71-yard drive on the next possession, highlighted by a 26-yard run by Krouse on a jet sweep and McMillan capped the drive with a 2-yard touchdown run to extend the Prior Lake lead to 28-7 with 1:22 to go in the first quarter.

Prior Lake’s defense then forced a three-and-out to start the second quarter and a short punt gave the Lakers the ball at Park’s 35-yard line.

Back-to-back double-digit runs by Krouse and receiver Jake Fier moved the ball deeper into Wolfpack territory. On first-and-goal from the 9-yard line, Haas took the snap, rolled to his right and threw to Fier, who caught the ball near the 5-yard line and dove into the end zone for the touchdown to push the Laker lead to 35-7 with 9:27 to go in the half.

The Wolfpack advanced the ball near midfield on their next possession but were ultimately forced to punt by the Laker defense.

Prior Lake then put together another, methodical drive, a 12-play 73-yard march that was culminated with Haas rolling right and throwing to receiver Ryan Anderson in the back of the end zone for another Laker touchdown, extending the lead to 42-7 with 4:01 to go in the first half.

Park would answer with a long touchdown pass to cut the lead to 42-14, the score at halftime.

The Wolfpack moved the ball into Prior Lake territory in the opening drive of the second half but that drive came to an abrupt halt when linebacker Cole Edwards intercepted a pass and toe-tapped along the sideline for the turnover.

The Lakers effectively put the game away on the ensuing possession with a nine-play 63-yard touchdown drive, highlighted by a 16-yard run by Cooper Busch and an 11-yard run by McMillan. McMillan finished the drive with a 7-yard touchdown run on the next play when he took the handoff and ran left before cutting back to his right and weaving his way into the end zone for the score, giving the Lakers a 49-14 lead midway through the third quarter.

Park would score their final touchdown late in the third quarter to make the score 49-21.

Running back Kevion York scored the final Laker touchdown on a 4-yard run late in the fourth quarter to reach the 56-21 final score.

Statistically, Haas completed 7 of 10 passes for 82 yards and three touchdowns.

McMillan was the leading rusher with 23 carries for 137 yards and two touchdowns. Spronk rushed for 96 yards on 12 carries and Krouse rushed for 69 yards on three carries.

Berggren was the leading tackler with eight tackles while Edwards, safety Ryan Schultze and linebacker Matt Nelson each had seven tackles.

The Lakers earned the #5 seed in section seeding and will travel to face the #4 seed East Ridge Raptors in the first round of the Class 6A playoffs on Friday Oct. 29 at 7pm at East Ridge High School.

It will be Prior Lake’s first opening-round road playoff game since 2009 at Bloomington Kennedy.

Friday’s matchup is the first meeting between Prior Lake and East Ridge since the second round of the 2015 Class 6A playoffs at East Ridge High School, a game in which the Raptors won 26-22 on a fake field goal touchdown in the final moments to advance to the state tournament.

Quarterback Tanner Zolnosky is East Ridge’s top passer, having completed 74 of 131 passes for 1,290 yards, eight touchdowns and four interceptions on the season.

Running back Toby Anene is the Raptors’ leading rusher this season with 79 carries for 416 yards, four touchdowns and one fumble. Anene had a huge game against STMA with 207 yards and three touchdowns on 24 carries.

The winner of Friday’s game at East Ridge will take on the winner between #1 seed Maple Grove and #8 seed Roseville at the high seed on Friday Nov. 5 at 7pm.

Prior Lake’s fans are being asked to wear orange to Friday’s game at East Ridge to support Parker Eisinger, a sophomore football player at Lakeville South who was recently diagnosed with Leukemia.

You can donate to Parker’s family’s GoFundMe page at the following link: https://gofund.me/8a2cbe85

Kickoff at East Ridge High School on Friday is scheduled for 7pm.

PL Lakers Live will be streaming Friday’s game. Friday’s stream with Dylan Corbet on the call will be live at the following link:

Be sure to check back next week for a recap of the East Ridge game and, if the Lakers beat East Ridge, a preview of the playoff matchup against Maple Grove/Roseville. 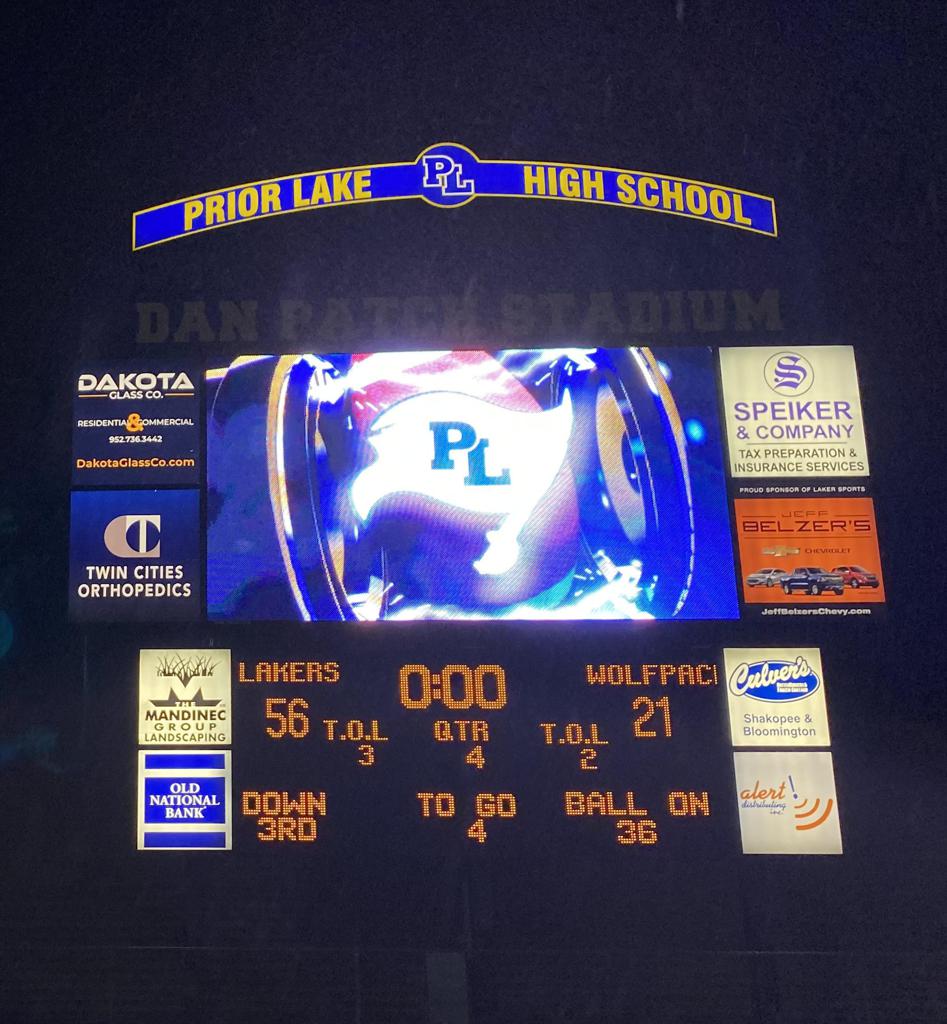