Prior Lake's trick play shocked the Irish on the last play, as they hope to win in more traditional fashion on senior night against Park

Quarterback Kyle Haas connected with receivers Ryan Anderson and Joey Krouse on a 54-yard hook-and-ladder touchdown as time expired as the Prior Lake Lakers defeated the Rosemount Irish 27-24 at Dan Patch Stadium.

After being aided by a facemask penalty that advanced the ball to the Prior Lake 46-yard line and only seven seconds left on the clock, Haas dropped back to pass and fired the ball over the middle of the field to Anderson, who caught the ball near the Rosemount 45-yard line and immediately pitched it backward to Krouse, who took the ball in stride, raced along the sideline and beat the Irish defensive backs to the end zone for the game-winning touchdown as time expired.

The victory for the Lakers (4-3 Overall, 3-3 Metro Gold South) gives them a chance to finish the regular season above .500 for the first time since their state tournament appearance in 2017 if they can beat Park of Cottage Grove in Week 8. The Irish (3-4 Overall, 2-4 Metro Gold South) will need a victory in Week 8 to finish .500.

Fans immediately rushed the field to celebrate the chaotic victory in a back-and-forth, evenly-matched game.

The two defenses traded stops on the first two drives of the game with the Irish stalling out just across midfield and needing to punt while the Laker drive ended on a fumble by running back Grayson Spronk near midfield.

The Prior Lake defense then stood tall again, not allowing the Irish to take advantage of good field position late in the first quarter and forcing a punt.

Unfortunately for the Lakers, the punt was downed at the 1-yard line but it turned out to be the start of an 11-play, 99-yard touchdown drive. The Lakers were able to advance the ball out of the shadow of their goal line thanks to a pair of strong runs by Spronk and running back Ryan Horejsi as the first quarter expired with no score.

Then, facing a third-and-9 on their own 41-yard line, Krouse took the ball on a reverse handoff, followed tight end Trace Bowman through a hole in the defense and took off toward the end zone for the 59-yard touchdown. Kicker Logan Lehrer’s extra point was good as the Lakers took a 7-0 lead with 8:38 to go until halftime.

Rosemount would answer however on the very next drive when quarterback Vincent Pyne connected with receiver Cedric Wall on a post route for a 44-yard touchdown on a third-and-5 to tie the game 7-7 with 6:20 to go in the half.

The Prior Lake offense stalled and was forced to punt on the next drive after a holding call negated what would have been a third-down conversion.

The teams exchanged punts on the next couple drives and the Irish had one last shot to score before halftime and took advantage. On first-and-10 with about 30 seconds to go in the second quarter, Rosemount backup quarterback Easton Richter, the better passer of the Irish QBs, threw a screen pass to his right to Wall, who caught the ball, weaved through the defense and sprinted down the sideline for an Irish touchdown to give Rosemount a 14-7 lead at the half.

Prior Lake went three-and-out on the opening drive of the second half but caught a break when Haas’ punt was muffed by the Irish returner to create a fumble. Anderson jumped on the ball to give possession back to the Lakers at the Irish 40-yard line.

On second-and-15, Prior Lake moved the chains on a swing pass from Haas to Spronk for a 20-yard gain to advance the ball near the Rosemount red zone. The Lakers then methodically moved the ball with the run game. Horejsi had a key fourth-down conversion and running back Cooper Busch barreled into the end zone for a 3-yard score on the next play to tie the game 14-14 with 6:36 to go in the third quarter.

Rosemount would respond however with a 17-play, 68-yard drive that featured a number of third-down conversions and a key pass interference penalty. The Laker defense ultimately made a great defensive stand and held Rosemount to a field goal as the Irish took a 17-14 lead. The Rosemount drive lasted nine minutes and 44 seconds, stretching into the fourth quarter and ended with only 8:52 to go in the game.

Prior Lake was unable to convert on the next drive after a false start on fourth down moved the Lakers back to midfield.

Perhaps an unnoticed key play in the game came on the ensuing punt. Haas’ punt bounced near the 15-yard line with the Irish, opting not to put a returner back deep, and Anderson sprinted to catch up with the ball and downed it at the 1-yard line.

The Laker defense took advantage of Anderson’s key play, forcing a three-and-out, and was aided by a dropped pass and an unsportsmanlike conduct foul on Wall for smacking cornerback Cole Clausen.

There was a scary moment on the ensuing punt when Krouse muffed the ball but fellow return man and safety Carter Berggren jumped on the ball to give Prior Lake possession at the Rosemount 40-yard line.

Facing third-and-16 at the Irish 34-yard line, Haas dropped back to pass and fired the ball to Spronk who caught the pass and toe-tapped along the sideline for a key 29-yard gain and a first down.

A few plays later, the Lakers were in the end zone on a 1-yard TD run by Horejsi and Lehrer’s extra point gave Prior Lake a 21-17 lead with just 1:12 left to go in the fourth quarter.

Rosemount would answer back in shocking fashion with Richter connecting with Wall on a deep pass for a 43-yard gain on the first play of the next drive. A couple of plays later cornerback Dylan Hanson was called for pass interference, which advanced the ball to the Prior Lake 12-yard line with under 30 seconds to go.

A couple of plays later it looked as though Rosemount had scored to take the lead on a screen pass but the Irish were called for an illegal formation due to having too many players in the backfield.

However, the penalty did not matter as Richter connected with receiver Sam Kuseske in the back of the end zone for a 9-yard touchdown to give Rosemount a 24-21 lead and what looked like an Irish win with just 12 seconds left.

However, on the ensuing kickoff return, Spronk was tackled just across the 30-yard line and a facemask penalty advanced the ball to the Prior Lake 46-yard line, setting up the Lakers for what turned out to be the game-winning hook-and-ladder play.

Statistically, Haas completed 7 of 9 passes for 136 yards and a touchdown.

Spronk was the leading rusher with 109 yards on 23 carries. Krouse had five carries for 67 yards and a touchdown.

Krouse also had three catches for 71 yards and the game-winning touchdown while Spronk had four catches for 65 yards.

Berggren was the leading tackler for the Lakers with 10 tackles. Safety Ryan Schultze had nine tackles while linebackers Aidan Gegenheimer and Cole Edwards each had eight tackles. Linebacker Matt Nelson had seven tackles.

The win was the second consecutive win for the Lakers against the Irish. Prior Lake won the last meeting in 2019 at Dan Patch Stadium.

The Lakers will welcome the Park of Cottage Grove Wolfpack to Dan Patch Stadium on Wednesday Oct. 20 at 7pm.

The game will be Prior Lake’s Senior Night and the final game of the regular season before Class 6A playoffs begin Friday October 29.

Prior Lake’s seniors will be honored before the game.

Prior Lake and Park have not met since the first round of the 2012 6A playoffs, a 47-7 Prior Lake win at Dan Patch Stadium.

The Wolfpack dropped down to Class 5A in 2015 but moved back up to Class 6A this season with the new district and section realignments.

This season, Park (4-3 Overall, 3-2 Metro Maroon South) has wins over Eagan, Hopkins, Burnsville and Anoka and losses to Lakeville South, Eastview and Woodbury.

The Wolfpack are highlighted by a high-powered offense, averaging 33.4 points per game.

Park, with its spread no-huddle style offense, is led by quarterback Evan Bearth, who has completed 126 of 195 passes for 17 touchdowns and four interceptions on the season.

Running back Blake Johnson has been outstanding in the running game for the Wolfpack, rushing for 662 yards and six touchdowns on 106 carries.

Receiver Brady Perryman is Bearth’s top target with 59 catches for 376 yards and five touchdowns. Perryman will also lineup at running back for the Wolfpack at times.

Playoff seeding will take place with a vote by the section coaches on Friday morning.

Usually seeding would take place on Thursday but has been pushed to Friday due to 6A games needing to be played on Thursday because of the official shortage.

As it stands right now, Prior Lake is likely to be seeded as a 4 seed or a 5 seed depending on the outcome of other games involving Section 6AAAAAA teams.

One-loss Eden Prairie, Two-loss Shakopee and One-loss Minnetonka are expected to be the top 3 seeds in some order barring any surprises in their final games or in the seeding meeting.

It is likely to be the Lakers and two-loss Wayzata arguing for the 4 and 5 seeds. A 4 seed would mean a first-round home game while a 5 seed would mean starting the playoffs on the road.

Wayzata finishes their season with a big game Thursday night at 6pm against three-loss Farmington, which could go a long way in deciding the 4 or 5 seed.

Burnsville, Edina and Hopkins are expected to be the 6, 7 and 8 seeds respectively.

Once the section seeds are voted on and decided by the coaches, they are then sent to the Minnesota State High School League to be entered into one of the four available randomly picked 32-team brackets.

Those brackets place one team from each of the four sections in a “pod” as it has been referred to in years past for the first two rounds of the playoffs, meaning the Lakers are not able to play a team from their own section until the third round/state quarterfinals.

Be sure to check social media for the full bracket and further playoff details sometime on Friday October 22.

Kickoff at Dan Patch Stadium on Wednesday is scheduled for 7pm.

PL Lakers Live will be streaming Wednesday’s game. Wednesday’s stream with Mitch Widmeier, Ben Tressel and John Wahlstrom will be live at the following link:

Be sure to check back next week for a recap of the Park game as well as a preview of the playoff matchup. 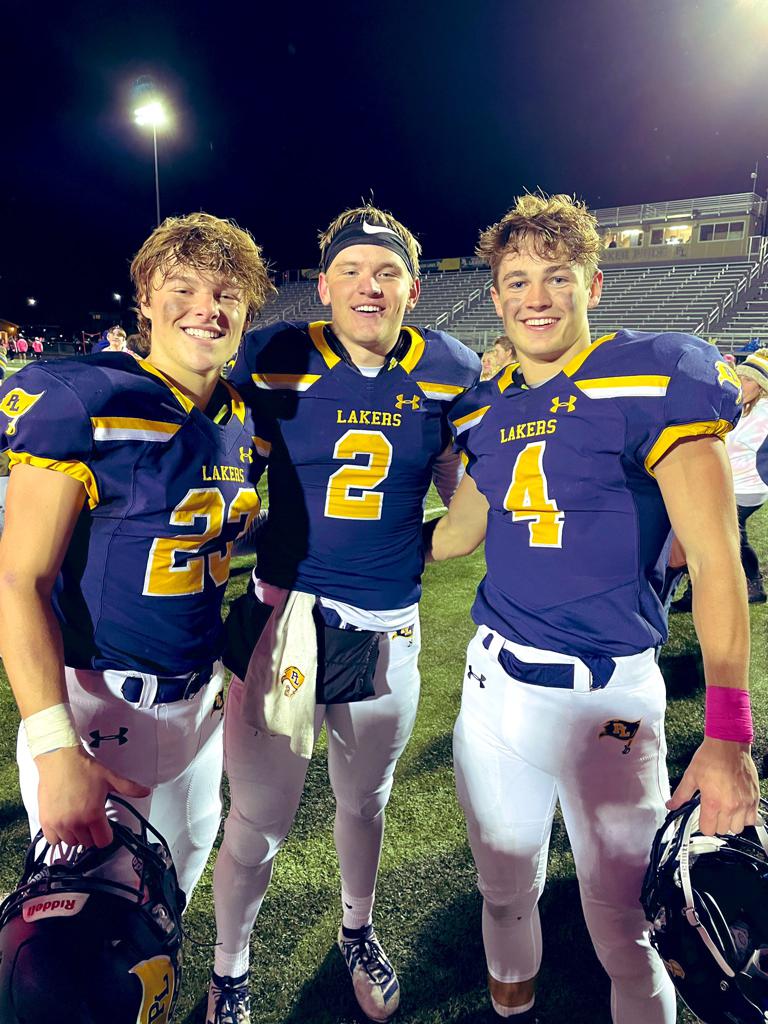 Quarterback Kyle Haas and receivers Ryan Anderson and Joey Krouse after their game-winning hook-and-ladder touchdown vs Rosemount on Oct. 14. Photo by Susan Haas and courtesy of Beth Fuller.