Prior Lake nearly pulled off the upset; they'll look to get back to their winning ways in big game against Rosemount.

It was a hard-fought battle but the Prior Lake Lakers couldn’t pull off the upset as the top-ranked Lakeville South Cougars held on for a 25-13 win Oct. 7 at Lakeville South High School.

The upset-minded Lakers struck first with a nine-play 60-yard drive on the opening possession of the game. Quarterback Kyle Haas dropped back and fired the ball to his left on a swing pass to running back Grayson Spronk, who caught the ball, broke a pair of tackles and plunged into the end zone for the score. Kicker Logan Lehrer’s extra point made the score 7-0 Lakers about five minutes into the game.

However, Lakeville South, with its Power-T offense, used fakes and deception to their advantage on the first play of the next drive. It looked as though the Laker defenders had stopped one of the Cougar running backs in the backfield… one problem… he didn’t have the ball. The quarterback had handed the ball to fullback Carson Hansen on a trap play and he sprinted all the way to the end zone for the touchdown. The Cougars' two-point attempt was no good thanks to a key tackle by lineman Tanner Rueckert and linebacker Matt Nelson to keep the score 7-6 Lakers.

Prior Lake moved the ball down the field once again on the next drive but ultimately stalled near midfield and punted the ball away.

The Cougars started their next possession deep in their own territory but a couple of double-digit-yard runs by Hansen advanced the ball to the Cougar 45-yard line and then quarterback Camden Dean kept the ball on a bootleg run and scampered into the end zone to give the Cougars a 12-7 lead late in the first quarter. The two-point attempt was no good again thanks to a key tackle by lineman Martin Owusu.

The Lakers nearly answered back immediately on a long kick return by Spronk, before he was brought down near the Cougar 25-yard line in the closing seconds of the first quarter. However, Prior Lake ultimately could not capitalize as Spronk was tackled a yard short of the first-down marker on a fourth-down run, turning the ball back over to the Cougars.

Lakeville South then put together a 13-play drive that started at their own 15-yard line but the Prior Lake defense came up big, making a key fourth-down stop deep in their own territory as Dean’s pass fell incomplete.

Unfortunately for the Lakers, the offense went three-and-out on the ensuing possession and was forced to punt the ball back to the Cougars.

The Cougars moved the ball deep into Laker territory with their strong run game, but the clock continued to tick towards halftime as Lakeville South kept getting tackled in bounds and had exhausted their timeouts.

Facing a third-and-10 on the Lakers 14-yard line, the Cougars opted to run the ball and were tackled in bounds, which kept the clock running. Lakeville South scrambled the field goal unit onto the field and was able to get the snap off before time expired but the kick sailed wide left and the score stayed 12-7 Cougars at halftime.

The Cougars received the second-half kickoff and took advantage with a methodical 12-play 70-yard touchdown drive, capped by a 4-yard touchdown run by Hansen. Rueckert made another key tackle on the two-point conversion attempt to hold the score at 18-7 Cougars.

Prior Lake would answer back however with a long drive of their own, a 15-play 72-yard scoring drive, highlighted by a pair of third-down completions from Haas to receiver/running back Joey Krouse to move the chains. Spronk plunged into the end zone for the 4-yard score to cut the Cougars lead to 18-13.

Prior Lake opted to go-for-two, trying to make it a three-point game but Haas was met in the backfield on the rollout attempt and was sacked, stopping the conversion attempt.

Unfortunately for the Lakers, that was as close as they would get as Hansen broke off another long touchdown run on the first play of the drive and last play of the third quarter, a gut-punch to Prior Lake. Lakeville South kicked the extra point to take a 25-13 lead.

Prior Lake moved the ball near midfield thanks to the run game on the next drive, but seeing time running out and needing to score twice, the Lakers opted to take a shot down the field as Haas fired the ball deep to Krouse on a wheel route but the pass was intercepted, ending the threat in the closing minutes.

Lakeville South was able to pick up a few first downs, running out the clock and securing the 25-13 victory.

Statistically, Haas completed 5 of 8 passes for 48 yards with a touchdown and an interception.

Spronk rushed for 85 yards and a touchdown on 19 carries while Krouse rushed for 33 yards on 10 carries.

Defensively, safety Carter Berggren led the team with 11 tackles while linebackers Cole Edwards and Aidan Gegenheimer along with safety Ryan Schultze each had 10 tackles. Cornerback Cole Clausen and linebacker Aidan McGowan each had eight tackles.

Two South Suburban Conference foes will meet on Thursday Oct. 14 when Prior Lake welcomes the Rosemount Irish to Dan Patch Stadium at 7pm.

Prior Lake and Rosemount last met in the season opener of the 2019 season, a 28-13 Prior Lake win at Dan Patch Stadium.

Prior to their 2019 matchup, the schools had not met since 2014, prior to the creation of district football. The teams played annually from 2010 to 2014 in the South Suburban Conference.

This year’s Rosemount Irish team (3-3 Overall, 2-3 Metro Gold South), led by longtime coach Jeff Erdmann, has been up and down, winning their first three games over Eagan 47-7, Edina 31-19 and Lakeville North 17-0 before losing the next three games to Eden Prairie 13-3, Lakeville South 28-14 and Farmington 13-3.

Quarterback Vincent Pyne is Rosemount’s top passer, having completed 32 of 46 passes for 359 yards, two touchdowns and no interceptions through the three games listed on MN Football Hub.

Running back Jayden Washington is Rosemount’s leading rusher with 51 carries for 213 yards, five touchdowns and one fumble through the three games listed on MN Football Hub. Pyne is also a threat in the run game with 29 carries for 183 yards in that same timeframe.

Receiver Cedric Wall has been Pyne’s top target in the passing game with 11 catches for 77 yards and a touchdown through the three games listed on MN Football Hub while receiver Sam Kuseske has six catches for 40 yards over that same timeframe.

Thursday will also be Prior Lake’s Tackle Cancer Game so be sure to wear your pink and support a great cause!

Playoff seeding will occur after the regular season is over (likely the morning of Friday October 22) and is strictly based on a vote by the head coaches in each of the four Class 6A sections.

The other teams in Prior Lake’s section, Section 6AAAAAA, include Burnsville, Eden Prairie, Edina, Hopkins, Minnetonka, Shakopee and Wayzata.

Prior Lake’s final two games against Rosemount and Park could have a big impact on where the Lakers are seeded by the coaches.

The Lakers could be seeded anywhere between a 3 seed and a 5 seed depending on the results of the next two weeks, both for Prior Lake and the other teams in Section 6AAAAAA. A 3 or 4 seed would mean a first-round home game while a 5 seed would mean an opening-round road game.

Once the section seeds are voted on and decided by the coaches, they are then sent to the Minnesota State High School League to be entered into one of the four available randomly picked 32-team brackets.

Those brackets place one team from each of the four sections in a “pod” as it has been referred to in years past for the first two rounds of the playoffs, meaning the Lakers could not play a team from their own section until the third round/state quarterfinals.

Be sure to check social media for the full bracket and further playoff details following the completion of the regular season next week, likely sometime on Friday October 22.

Kickoff at Dan Patch Stadium on Thursday is scheduled for 7pm.

The game is being played on Thursday instead of Friday due to an officials’ shortage.

PL Lakers Live will be streaming Thursday’s game. Thursday’s stream with Mitch Widmeier, Ben Tressel and John Wahlstrom will be live at the following link:

Be sure to check back next week for a recap of the Rosemount game as well as a preview of the Week 8 matchup vs Park.

Next week’s game against Park will be played on Wednesday due to MEA break. 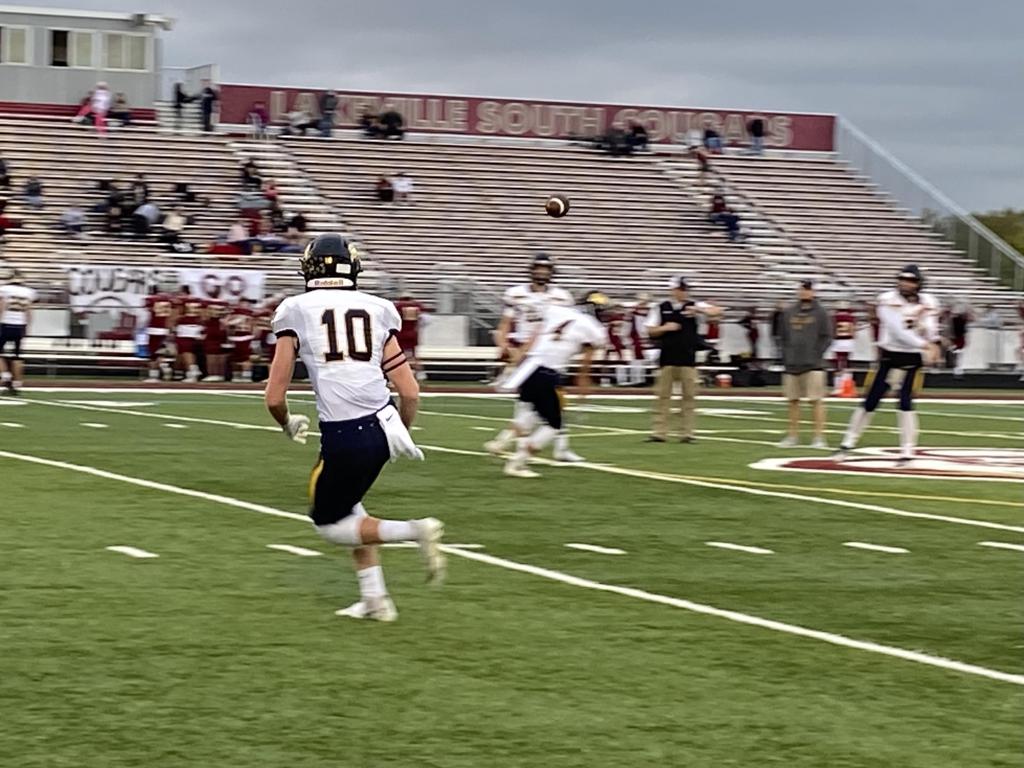