The Prior Lake Lakers couldn’t recover from an early 21-0 deficit as the Eden Prairie Eagles rolled to a 52-17 victory Oct. 1 at Dan Patch Stadium.

Prior Lake started the game with the ball but a pair of short runs and a sack resulted in a three-and-out. The Eagles then returned the ensuing punt deep into Laker territory at the 30-yard line.

A few plays later, facing a second-and-14 at the Prior Lake 19-yard line, Eden Prairie quarterback Nick Fazi rolled to his left, faked a jump throw and rolled back to his right, followed his blockers and weaved his way into the end zone for an incredible touchdown run, giving EP a 7-0 lead less than four minutes into the game.

It was more of the same on the next Laker drive, a pair of short runs and an incomplete pass led to another Prior Lake punt that set Eden Prairie up near midfield. A pair of roughly 20-yard runs on the next two plays by running back Takhi Vaughn advanced the ball to the Laker 5-yard line and then running back/linebacker Bennett Larson plunged into the end zone for the score to increase the EP lead to 14-0 less than halfway into the opening quarter.

Prior Lake’s next drive had some promise as a pass play from quarterback Kyle Haas to tight end Trace Bowman advanced the ball across midfield. Haas appeared to move the chains again on a third-down scramble a few plays later but an illegal motion penalty was called and the Lakers ultimately had to punt.

Two plays later, Vaughn broke off a 60-yard touchdown run and just like that it was 21-0 late in the first quarter.

The Lakers would answer back however with a 13-play 76-yard drive highlighted by a key 24-yard pass completion from Haas to receiver Kellan Miller on a third down-and-long to move the chains. A few plays later, Haas rolled to his right, threw and connected with receiver Ryan Anderson in the end zone for a 10-yard touchdown. Kicker Logan Lehrer’s extra point cut the EP lead to 21-7 with 9:05 to go in the half.

The teams exchanged punts on the next two possessions and the Lakers seemed to be in good shape with the Eagles backed up deep in their own territory on second-and-long but Vaughn took the ball, weaved his way through the Laker defense and took off down the sideline for an 81-yard Eden Prairie touchdown, extending the lead to 28-7 with under four minutes to go in the half.

Prior Lake’s next drive looked like it could turn into something but a key holding penalty on a third-down scramble by Haas halted the drive and forced a punt.

Perhaps the key play of the game came on the ensuing Eden Prairie drive with the Eagles facing a fourth-and-four at the Prior Lake 26-yard line with less than a minute to go in the half. Fazi faked a handoff to the fullback and threw to receiver Jermell Taylor, who caught the ball near the 10-yard line, and ran into the end zone for the touchdown, yet again increasing the EP lead to 35-7 with 27 seconds to go in the half.

The Lakers caught a break on the ensuing kickoff as Dylan Hanson was able to jump on the ball near the Prior Lake 45-yard line to give the Lakers one more chance to score before halftime and PL took advantage. Haas completed passes to running back Ryan Horesji, Anderson and running back Grayson Spronk to advance the ball all the way to the Eden Prairie 12-yard line with just 2 seconds left. Lehrer kicked a 29-yard field goal as time expired to give the Lakers a bit of a confidence boost at halftime with the score 35-10 EP.

Prior Lake’s defense got a stop on the opening drive of the second half and gave the Laker offense a chance to cut into the Eden Prairie lead. A 24-yard run by Spronk on a toss play and a 20-yard pass from Haas to Anderson looked to have the Lakers in business deep in Eagle territory. Haas then dropped back to pass and threw across the middle to receiver/running back Joey Krouse but the ball was behind Krouse and intercepted by Larson, ending the threat.

Then, facing second-and-18 at their own 9-yard line, Fazi threw to running back Tyler Walden in the flats and the Lakers attempted to push him out of bounds but Waldon kept feet in bounds and took off down the sideline before being caught by safety Carter Berggren after an 81-yard gain. Waldon ran the ball in on the next play, increasing the lead to 42-10 less than halfway into the third quarter.

On the first play of the next Laker possession, Krouse took the ball on a jet sweep and ran around the left side but was hit hard from behind and fumbled. The ball was recovered by Eden Prairie and ultimately led to a 46-yard field goal that essentially put the game out of reach.

Each team had one touchdown run in the fourth quarter to reach the 52-17 final score. Running back Daveon McMillan had a 5-yard touchdown run for the Lakers.

Statistically, Haas completed 18 of his 25 passes for 223 yards with one touchdown and one interception.

Spronk was the leading rusher with seven carries for 42 yards.

Anderson caught four passes for 52 yards and a touchdown.

Safety Ryan Schultze was the leading tackler with 12 tackles, while linebacker Matt Nelson and safety Carter Berggren each had seven tackles.

The next two Prior Lake games will be on Thursdays due to a shortage of officials.

The Cougars (5-0 overall, 4-0 Metro Gold South) enter the matchup as the top-ranked team in both the latest AP Class 6A poll and the Star Tribune’s Metro Top 10.

Lakeville South is led by Head Coach Ben Burk, who is in his second season as the permanent head coach after taking over as interim coach from Tyler Krebs part-way through the 2019 season.

Prior Lake and Lakeville South last met in Week 3 of the 2020 season, a 49-35 Cougar win at Dan Patch Stadium.

Lakeville South was named the 2020 Mythical State Champion based on being the top-ranked team in the final 2020 Class 6A AP poll after the season was shortened due to COVID-19.

The Cougars have not lost a game since the 2019 state semifinals where they fell to the eventual 2019 state champion Wayzata Trojans.

Lakeville South is led by a strong rushing attack out of a T formation, which often features three running backs lined up in a row a few yards behind the quarterback to form the shape of a “T” with many fakes to try to create confusion as to which player has the ball.

Quarterback Camden Dean is a threat to both run or pass. Dean has completed 16 of 28 passes for 363 yards, three touchdowns and an interception while also rushing for 88 yards and seven touchdowns on 34 carries.

Kickoff at Lakeville South on Thursday is scheduled for 7pm.

Mitch Widmeier is expected to be on the call for the broadcast on MN Prep Spotlight. Mitch started calling PL football home games for Lakers Live in 2021 alongside Ben Tressel and John Wahlstrom. The exact link to the MN Prep Spotlight stream is not yet known. Be sure to check Twitter for up-to-date streaming information.

Be sure to check back next week for a recap of the Lakeville South game as well as a preview of the Week 6 matchup vs Rosemount. 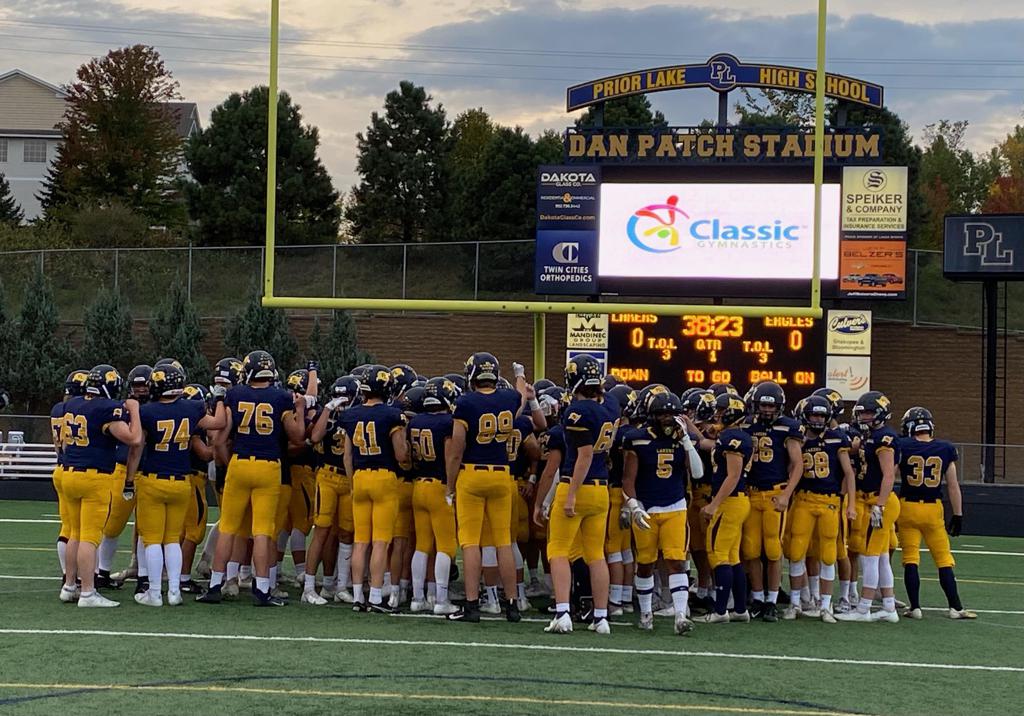