A gutsy call helped Prior Lake beat the Panthers as PL prepares to host Eden Prairie for homecoming.

Running back Grayson Spronk rushed for a 19-yard touchdown and quarterback Kyle Haas connected with receiver Ryan Anderson for a go-ahead two-point conversion with 4:46 to go as the Prior Lake Lakers defeated the Lakeville North Panthers 17-14 Sept. 24 at Lakeville North High School.

This season’s game was also a part of the American Rivalry Series. A trophy and hats were awarded to the Lakers after the game. Spronk was named MVP of the game.

It was a game of bending but not breaking for both defenses as the contest started with opening drives where the offenses moved the ball but stalled out on failed fourth-down conversions deep in opponent territory. Despite the low scoring, there was not a punt until the third quarter.

Lakeville North broke through for the first score of the game on their second drive of the game. Facing a fourth-and-11 at the Prior Lake 24-yard line, quarterback Seth Johnson dropped back, rolled to his right and threw back left on a screen pass to running back Gavyn Schraufnagel, who caught the pass, broke a pair of tackles and scampered into the end zone to give the Panthers a 7-0 lead in the closing seconds of the first quarter.

The Lakers answered back on the next drive with a touchdown of their own. The possession was highlighted by a 37-yard scramble by Haas on a third-down where he stepped up in the pocket and took off down the Prior Lake sideline for a big gain into Panther territory. Running back Cooper Busch finished the drive with a 1-yard touchdown run a few plays later and kicker Logan Lehrer’s extra point tied the game 7-7 with 9:48 to go in the half.

Much like the first two drives of the game, the next two ended with fourth-down stops, the Lakers forcing an incompletion and Lakeville North getting the ball back after a fumbled snap by Haas.

The Panthers took a shot on the next play after Haas’ fumbled snap and threw the ball deep to receiver Najee Nelson who caught the ball over cornerback Dylan Hanson near the Laker 40-yard line.

Five plays later, Schraufnagel took a handoff from Johnson, weaved his way through the Laker defense and into the end zone for the Panther touchdown, giving the Panthers a 14-7 lead with under a minute to go until halftime.

The score remained 14-7 Panthers at the half.

The Lakers connected on a 41-yard pass play from Haas to Anderson on the opening drive of the half but unfortunately for Prior Lake, the drive ended at the Panther 10-yard line when Haas’ pass to the end zone landed incomplete.

Prior Lake’s defense forced the first punt of the game on the next drive after the Panthers converted on only one first down.

The Laker offense then methodically moved the ball down the field, headlined by an 18-yard run by Spronk but the drive stalled near the Panther 20-yard line. The Lakers attempted a 37-yard field goal but Lehrer’s kick sailed wide left in the closing moments of the third quarter.

Perhaps the play and call of the game came on the next possession after Lakeville North moved the ball into Prior Lake territory. Facing a fourth-and-2 at the Prior Lake 34-yard line, Johnson dropped back and threw the ball deep down the middle of the field to Nelson, who caught the ball and was taken down near the 3-yard line but the Panthers were called for holding, negating the big play, keeping the score 14-7 and forcing Lakeville North to punt instead.

Prior Lake then put together the 12-play 93-yard drive of the game, highlighted by key third-down conversions by Busch and Spronk. Then, facing first-and-10 on the Panther 19-yard line, Spronk took the ball on a toss play to his left and followed lineman Greg Johnson down the sideline and into the end zone to cut the Panthers lead to 14-13 with 4:46 to go in regulation.

On the next drive, with the Panthers facing a third-and-8 at their own 33-yard line, Johnson took the snap and rolled to his left but he was met in the backfield by defensive lineman Martin Owusu, who tackled Johnson for the huge sack.

With converting the fourth down-and-long looking unlikely, the Panthers opted to run out the back of their own end zone on the next play for a safety to increase the Laker lead to 17-14 but give Lakeville North a chance at an onside kick.

However, the onside kick sailed out of bounds, giving the Lakers possession in the closing minutes and effectively ending the game, a Prior Lake 17-14 win.

Statistically, Haas completed 6 of 9 passes for 94 yards and that important 2-point conversion, which earned him “Lakers Live Player of the Week” honors.

Spronk had 15 carries for 87 yards and a touchdown, while running back Ryan Horejsi had 63 yards on 18 carries.

Owusu, linebacker Cole Edwards and safety Ryan Schultze lead the Prior Lake defense in tackles with 11 tackles each. Safety Carter Berggren had 8 tackles.

Two familiar foes will meet on Friday Oct. 1 when Prior Lake welcomes the Eden Prairie Eagles to Dan Patch Stadium for PL’s homecoming game at 7pm.

The Lakers and Eagles played twice in 2020, a 35-7 Eden Prairie win at Dan Patch Stadium in the penultimate game of the regular season and then a 21-7 Eden Prairie win in the state qualifier/section final round of the playoffs, which ended up being the last game played for both teams in 2020 due to the COVID-19 pandemic.

Prior Lake has never beaten Eden Prairie since the two teams started facing each other regularly in 2013.

EP, in their Wing-T offense, is led by quarterback Nick Fazi, who has completed 25 of 37 passes for 258 yards, five touchdowns and no interceptions on the season.

Running back Javon Palmer-Pruitt has been the Eagles' primary running back, rushing for 302 yards on 43 carries for one touchdown on the season. Running backs Tyler Walden, Takhi Vaughn and Toby Frost also contribute in the run game as well.

Michael Gross and Jermell Taylor are the leading receivers for the Eagles. Gross has six catches for 93 yards and three touchdowns and Taylor has eight catches for 82 yards and one touchdown.

Friday’s game may also be important in a couple of weeks at the section seeding meeting as both the Lakers and the Eagles reside in Section 6AAAAAA. The Lakers are currently 2-1 against section opponents with wins over Hopkins and Eden Prairie and a loss to Shakopee. Eden Prairie is yet to play a game against a section opponent.

PL Lakers Live, which will be the streaming home for many Laker sports throughout the school year. Friday’s stream with Mitch Widmeier, Ben Tressel and John Wahlstrom will be live at the following link:

Be sure to check back next week for a recap of the Eden Prairie game as well as a preview of the Week 6 matchup vs Lakeville South. 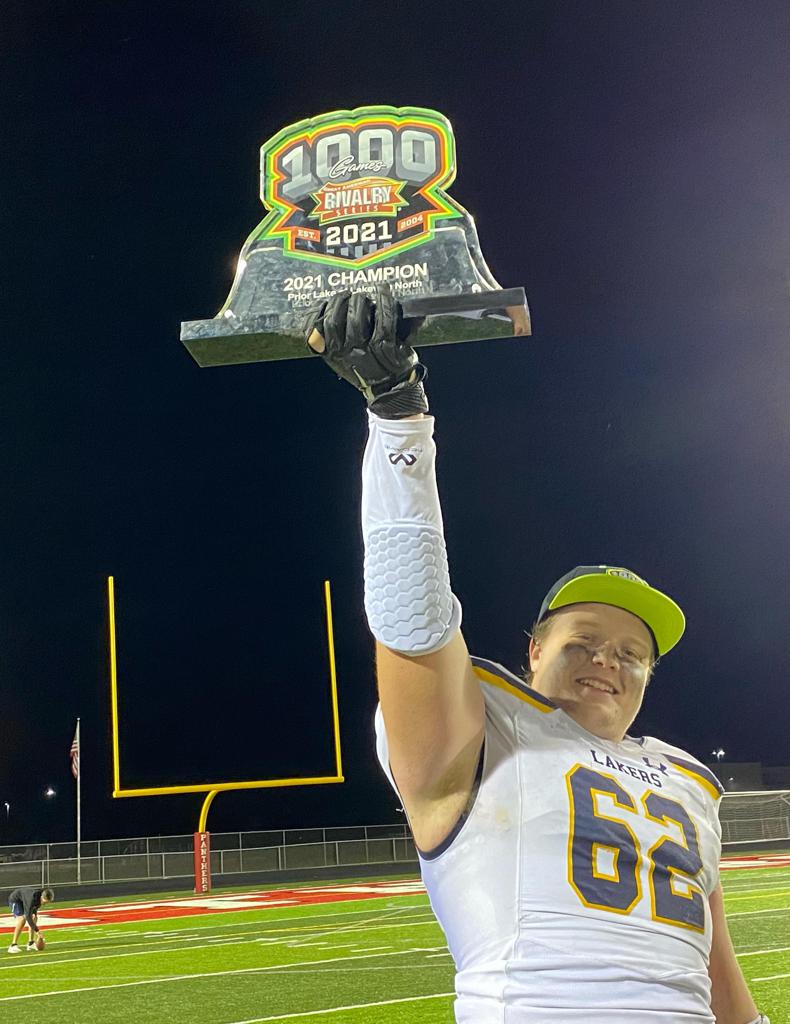