Prior Lake rolled to win against Roseville and now will get one more shot at top-seeded and second-ranked EP to close the 2020 season.

Sometimes finality can be the best motivation…

With rumors swirling throughout the day about whether Tuesday night’s opening round playoff game would be the last game of the 2020 football season due to a potential statewide shutdown of football, the fourth-seeded Prior Lake Lakers took the field excited and dismantled the Roseville Raiders 44-0 Nov. 17 at Dan Patch Stadium.

While the Lakers (4-3) ultimately found out they will get to play one final game on Friday at 6 p.m. at top-seeded Eden Prairie before the now-announced shutdown will go into effect Friday night at 11:59 p.m., Wednesday’s game against Roseville was set to be the last game of the season at Dan Patch Stadium regardless, and the win allowed the seniors to walk off their home field victorious one last time.

The excitement against Roseville began on the opening kickoff when the Raiders tried a surprise onside kick to start the game but Laker return team was alert and jumped on the ball to give Prior Lake possession. However, the Lakers couldn’t capitalize as quarterback Kyle Haas threw an interception three plays later on a pass intended for running back/linebacker Cam Miller.

Thankfully for Prior Lake, the Laker defense stood tall, as it did much of the night, and forced a punt.

The Lakers then put together a methodical 12-play 75-yard drive highlighted by a pair of double-digit perimeter runs by running back/receiver Joey Krouse and capped by a 1-yard touchdown run by Miller. Keller’s extra point put PL up 7-0 with 2:26 to go in the first quarter.

A three-and-out by the Prior Lake defense quickly got the ball back to the offense who was ready for more.

Facing a first-and-10 at the Laker 48-yard line, running back/safety Tyler Shaver took the ball on a toss play from Haas to his left and followed lineman Joe Kohlback, who made an incredible block on a Raider linebacker. Shaver then stiff-armed another defender near the 20-yard line and tiptoed his way into the end zone.

After the Raiders jumped offside on Keller’s extra point attempt, Prior Lake opted to go-for-two and converted on a run by Miller to increase the Laker lead to 15-0 with 11:50 to go until halftime.

The teams then both punted on the next few possessions and a short Roseville punt set the Prior Lake offense up near midfield.

The Lakers were then aided by a late hit penalty after a false start later in the drive to reach the red zone. An 8-yard run by Miller and an offside penalty advanced the ball inside the 10-yard line and then Haas rolled to his right, threw to receiver/defensive back Jake Anderson, who caught the ball in the back of the end zone for the score. Keller’s extra point made the score 22-0 with 1:56 to go in the half.

Following the ensuing kickoff, Prior Lake opted to use two timeouts after the first two plays in an attempt to get another possession before halftime. On the third play, feeling the pressure to pass to avoid giving the ball back to PL, Roseville’s quarterback sailed a throw over the intended receiver’s head and into the arms of safety Dustan Green, who intercepted the ball.

A long run by Krouse and catch-and-run by Shaver set the Lakers up at the Roseville 31-yard line in the closing seconds. A couple of plays later, Haas dropped back and scrambled to his left, signaled to his receivers to run downfield and fired the ball toward the end zone, which caught was caught near the goal line by receiver Kyle McCullough for a touchdown. Roseville then proceeded to jump offside twice on the extra point, leading the Lakers to go-for-two and again convert on a run by Miller, putting the score at 30-0 Lakers with 13 seconds to go until the half.

Prior Lake’s defense forced another three-and-out and a punt to start the third quarter.

Shaver then kick-started the next drive with a strong 11-yard run on the opening play to get the ball into Raider territory. Prior Lake then methodically moved the ball down the field and Haas essentially put the game out of reach with a 4-yard touchdown run on a bootleg. Keller’s extra point made it 37-0 with 6:56 to go in the third quarter.

The final score of the game came when the Raiders snapped a ball over the quarterback’s head later in the quarter and Swartz jumped on the ball in the end zone for the score.

Statistically, Haas completed 3 of 7 passes for 47 yards, two touchdowns and an interception.

Shaver led the Lakers in rushing, yet another 100-yard game for him, with 105-yards on 16 carries and a touchdown. Krouse had nine carries for 86 yards and Miller had 10 carries for 55 yards, a touchdown and the pair of two-point conversions.

McCullough, Shaver and Anderson each had a reception.

Linebackers Tanner Newlin, Drew Johnson and Cole Edwards each had seven tackles. Swartz was noteworthy as well with two fumble recoveries, including one for a touchdown.

With Gov. Tim Walz’s announcement of dial back measures that will go into effect Friday Nov. 20 at 11:59 p.m., which will end the high school football season, the Prior Lake Lakers and the Eden Prairie Eagles opted to move their second-round game, originally scheduled for Saturday Nov. 21, up a day to Friday Nov. 20 at 6 p.m., as most teams still playing across the state have also done.

Traditionally, the MSHSL would not allow teams to play two games so close together (Tuesday and Friday) but made an exception for these unique circumstances after they were told by the state that Friday at 11:59 p.m. was a firm deadline and wanted to give teams one final opportunity to play this season.

Friday’s game will be the final football game of 2020 for both teams, win or lose.

Here is the official updated end of season guidance provided by the MSHSL after Walz’s announcement Nov. 18: https://www.mshsl.org/sites/default/files/2020-11/football-and-volleyball-end-of-season-guidance-and-information.pdf

In a normal season, the second-round games in the 6A playoffs would be the State Qualifier games, also commonly referred to as the Section Final, where the winner would advance to the state tournament.

Instead, given the circumstances of the 2020 season, Friday’s game will simply be one last time for both the Lakers and Eagles to take the field. Per the bracket on the MSHSL website, they will refer to the winner of Friday’s game as a “Class 6A Section Champion.”

The top-seeded and second-ranked Eagles (6-0) have yet to play a playoff game after receiving a first-round bye.

Kickoff at Eden Prairie on Friday is scheduled for 6 p.m.

Reminder: Friday’s game will be the final game of 2020 for both teams regardless of the outcome.

Since it is an away game, Eden Prairie will be providing the stream this week. Per @FootballEPHS on Twitter, the stream will be live at the following link: https://boxcast.tv/view/eden-prairie-vs-prior-lake-817295

Be sure to check back next week for a recap of the Eden Prairie game to close the season.

Thank you to all who have followed along in 2020. 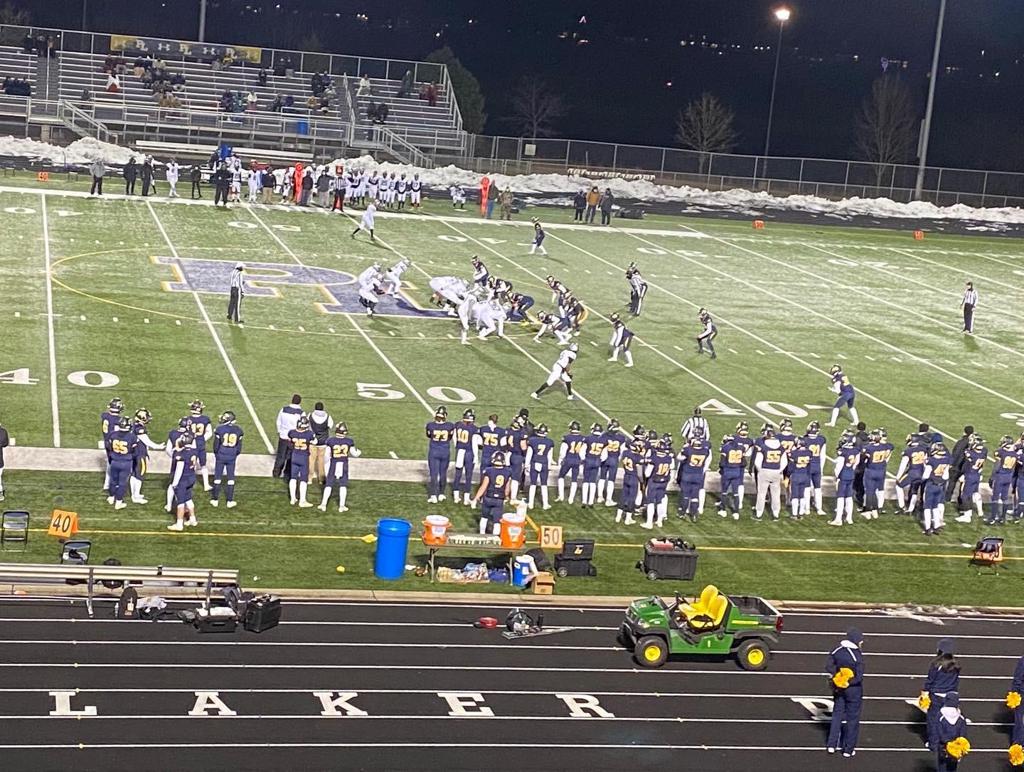