The Prior Lake Lakers got back to their winning ways Wednesday against Minnetonka; they hope to ride that momentum into Tuesday's first round game against Roseville.

The Prior Lake Lakers scored a touchdown on the opening possession and never looked back as they rolled past the Minnetonka Skippers 49-7 Nov. 11 at Minnetonka High School.

The victory gave Prior Lake (3-3 Overall, 2-3 Metro West) a third-place finish in the Metro West district, while the loss dropped Minnetonka (1-5 Overall, 0-5 Metro West) to seventh.

The 11-play 76-yard opening drive was highlighted by a 26-yard run by running back Tyler Shaver and a 12-yard run by running back Cam Miller. Then, facing a first-and-goal at the 4-yard line Kyle Haas rolled to his right and threw to tight end/linebacker Tanner Newlin, who was open at the goal line and caught the ball for a touchdown. Kicker Josh Keller’s extra point made it 7-0 Lakers less than five minutes into the game.

On Minnetonka’s first drive the Laker defense halted the Skippers near midfield and forced a punt, aided by a bad snap on third down.

Prior Lake’s offense then wasted little time marching down the field when running back/receiver Joey Krouse gained close to 20 yards on a reverse handoff on the first play and then another 12 yards on a jet sweep a couple of plays later to advance deep into Minnetonka territory. Two plays later, Shaver bounced a run off the left side of the offensive line and into the Minnetonka secondary before being pushed out of bounds at the 5-yard line. Miller then plunged into the end zone for a 2-yard touchdown and Keller’s extra point extended the Prior Lake lead to 14-0 with 1:25 to go in the first quarter.

The Lakers recovered a fumble on the following possession but then had to punt.

Luckily for the Lakers, the punt pinned the Skippers deep in their own end and Prior Lake’s defense stood tall and forced a punt of their own to set the Prior Lake offense up with great field position at the Skipper 42-yard line.

A few plays later, with Prior Lake facing a first-and-10 at the 16-yard line, Miller made what may be the play of the game. Miller took a handoff from Haas to his left and was met by Skipper defenders near the line of scrimmage but thanks to his strength and help from his offensive linemen were able to advance to about the 5-yard line before ultimately breaking free into the end zone for a touchdown. Keller’s extra point made it 21-0 Lakers with 9:16 to go in the first half.

Minnetonka returned the ensuing kickoff deep into Prior Lake territory but ultimately turned the ball over a couple of plays later when Jason LaGrange forced and recovered a fumble.

The Laker offense then put together an 11-play 68-yard drive. A 22-yard completion down the middle of the field from Haas to Miller advanced the ball near the goal line and Miller ran the ball in on the very next play to push the Laker lead to 28-0 with 4:41 to go in the first half.

The Skippers would finally answer, however, as Minnetonka running back Ben Tolkinen broke off a 70-yard run on the next drive to get the ball down to the Laker 5-yard line and then Tolkinen scored on a 2-yard touchdown run on fourth-and-goal to cut the Prior Lake lead to 28-7 with 2:13 to go in the first half.

It looked as though Minnetonka had made a stop right before halftime and was going to get the ball back but on the ensuing punt return, the Skippers tried a reverse, which was snuffed out by Krouse, who forced a fumble. The ball was then recovered by safety Caleb Rios inside the Minnetonka red zone.

Three plays later, Prior Lake capitalized when Haas dropped back and threw to Shaver on a wheel route near the goal line. Shaver leaped and made an outstanding catch over the top of two Minnetonka defenders for the touchdown in the closing seconds of the first half. The score plus Keller’s extra point extended the Laker lead to 35-7, the score at halftime.

Defensive back Ryan O’Connor intercepted a pass as time expired in the first half on a last-second throw by Minnetonka.

The Skippers looked to have something going on the first drive of the second half, advancing the ball down to the Laker 11-yard line on a fake punt but the threat was halted by a bad snap, which was recovered by Miller.

Two plays later, Shaver took a handoff around the left side of the offensive line and sprinted down the sideline before being knocked out of bounds near midfield. A couple of plays later, Miller took a handoff from Haas, juked a defender and took off into the secondary before ultimately being tackled at the 10-yard line. Newlin barreled into the end zone on a reverse three plays later to extend the lead to 42-7 late in the third quarter and ultimately put the game out of reach.

Haas added the final touchdown on a quarterback sneak later in the game.

Statistically, Haas completed 7 of 13 passes for 85 yards and two touchdowns.

Miller was the leading rusher with 18 carries for 139 yards and three touchdowns but Shaver wasn’t far behind with 13 carries for 114 yards. Krouse had nine carries for 71 yards.

Shaver was the top receiver with three catches for 32 yards and a touchdown.

Newlin and linebacker Cole Edwards led the Lakers in tackles with seven each, while safety Dustan Green had six.

The Lakers will take the field as the home team one last time in 2020 as the fourth-seeded Prior Lake Lakers will host fifth-seeded Roseville Raiders in the opening round of the playoffs on Tuesday Nov. 17 at 6 pm at Dan Patch Stadium.

*Please note the time change from what was originally shared and listed on the bracket.

Tuesday’s game will be the final home game for the Lakers in 2020, as Prior Lake and Roseville are the two lowest remaining seeds in their portion of the bracket and the higher seeded team will host each round.

Teams can play a maximum of three games in the 2020 playoffs. The updated bracket can be found here: https://docs.google.com/spreadsheets/d/e/2PACX-1vTjHh971i9BqObNUi-O_EAs-TheI3bINlqbCvPSZVDPbGWo33VMuHgtQ80A0wbH01aXi-6Ja8oKUrnl/pubhtml

Tuesday’s matchup is the first between Prior Lake and Roseville in recent history so the Raiders will be an unfamiliar opponent for the Lakers.

The Raiders began that stretch by defeating White Bear Lake 20-14 on Nov. 3. They then lost a heartbreaker to Woodbury 10-9 on Nov. 9, a game in which Roseville scored a touchdown late in the game to pull within one but could not convert on the two-point conversion attempt that would have given them the lead. Roseville then defeated Mounds View 18-14 in the season finale last Wednesday Nov. 11.

Roseville had begun the season with back-to-back losses to Blaine 28-13 and Farmington 42-7.

The Raiders offense this season has been led by quarterback Ricky Weber, who has completed 22 of 44 passes for 271 yards with three touchdowns and four interceptions. However, Weber missed last week’s game against Mounds View and the Raiders were quarterbacked by Kidus Belete, who completed 4 of 7 passes for 44 yards.

If Weber plays, he is also a run threat for Roseville, having rushed for 165 yards on 45 carries this season.

The winner of Tuesday’s game will travel to Eden Prairie to take on the top-seeded Eagles in the second round on Saturday Nov. 21.

Kickoff vs Roseville on Tuesday is scheduled for 6 p.m. at Dan Patch Stadium.

If you can’t make it to the game, you can watch the online video stream with Ben Tressel and John Wahlstrom. The stream team will be streaming home games only in 2020 with the host site streaming the away games.

Be sure to check back next week for a recap of Roseville and, if the Lakers win, a preview of Saturday’s matchup at Eden Prairie.

Follow @plhsfootball, @pl4lstreaming and @pllakers on Twitter for further updates and links to the streams throughout the season. 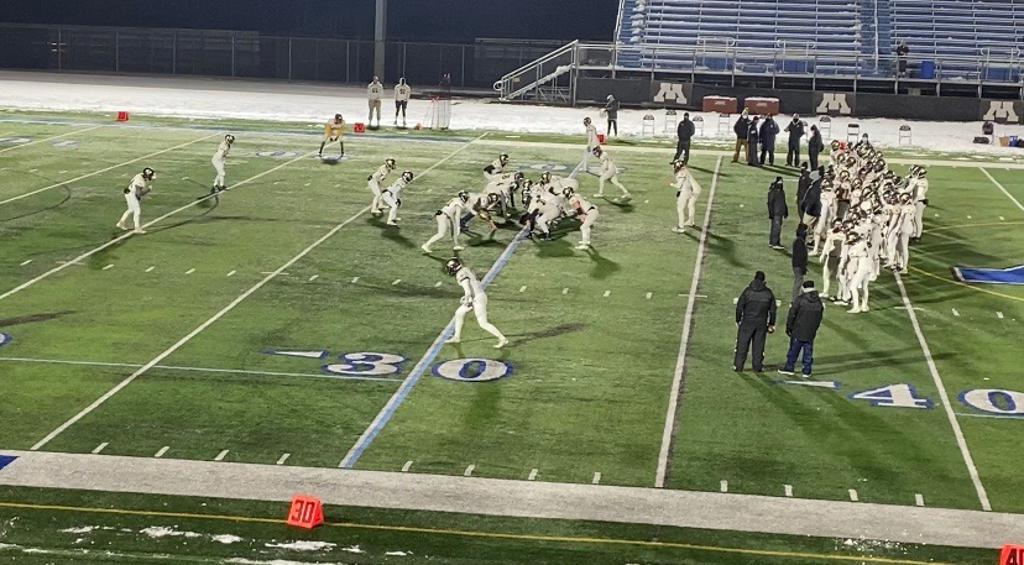