Prior Lake lost a hard-fought game to STMA and will need to turn the page quick as EP awaits.

The win vaulted STMA (4-0 Overall, 3-0 Metro West) to second in the sub-district standings while Prior Lake (2-2 Overall, 2-1 Overall) dropped to third in those standings.

Prior Lake opened the game on a 12-play drive that ultimately stalled at the STMA 14-yard line. Kicker Josh Keller attempted a field goal but it sailed wide right to end the threat.

The Knights then responded with a combination of long runs and short passes, capping their opening drive with a 22-yard touchdown pass from STMA quarterback Jack Drobinski to receiver Jack Hulting. Drobinski rolled to his right and threw to the back of the end zone where Hulting caught the ball and dragged his foot for a touchdown and gave STMA a 7-0 lead with 4:31 to go in the first quarter.

The Lakers moved the ball well on the ensuing drive but ultimately stalled when they crossed midfield after a holding penalty led to a Prior Lake punt.

Three plays later, with STMA facing a third-and-2 at their own 35-yard line, running back David Collins took the ball on a toss play to his left and followed his blockers. It looked like he merely was going to pick up the first down but Collins spun off a Laker defender and took off into the end zone for a 65-yard touchdown to give the Knights a 14-0 lead in the closing seconds of the first quarter.

The Knights forced a three-and-out on the next drive to quickly get the football back.

It looked as though STMA was about to blow the game open when they reached a first-and-goal on the Prior Lake 2-yard line but a massive tackle in the backfield by lineman Preston Swartz on Collins followed immediately by a sack by linebacker/running back Cam Miller halted the touchdown threat and forced a field goal attempt. Linebacker/tight end Tanner Newlin flew off the right end and blocked the field goal attempt to end the threat and fire up the Laker sideline.

The three-headed monster of Shaver, Miller and receiver/running back Joey Krouse then led the Prior Lake offense deep into STMA territory. Facing a third-and-8 at the STMA 22-yard line, Haas took the shotgun snap, dropped back and threw to the end zone down the middle of the field where Krouse made the catch over a pair of Knights defenders for the Laker touchdown with less than a minute to go in the half. Keller’s extra point made it 14-7 Knights, which was the score at halftime.

STMA responded to the Prior Lake score on the first possession of the second half. Facing a third-and-9 at their own 39-yard line, Drobinski connected with Collins on a wheel route out of the backfield, who caught the ball in stride and glided into the end zone to stretch the lead back to 21-7 STMA.

The next Laker drive was the Cam Miller show, with five runs including a 24-yarder where he bounced outside and was pushed out of bounds inside the 5-yard line. Shaver scored on a 4-yard touchdown run on the next play and Keller’s extra point cut the lead to 21-14 with 8:28 to go in the third quarter.

On the first play of the following drive at the Laker 49-yard line, Collins took a handoff and ran to his left, spun off a tackle attempted by defensive back Ryan O’Connor and took off to the end zone to yet again extend the Knights lead to 28-14 with 2:06 to go in the third quarter.

Prior Lake quickly responded on a 61-yard kickoff return by Krouse to set up the Lakers just outside of the STMA red zone. Two plays later, Haas connected with Krouse on a corner route near the pylon for a Laker touchdown. Keller’s extra point made the score 28-21 Knights with 1:26 to go in the third quarter.

The Laker defense held the Knights on the next possession and forced a punt in the opening seconds of the fourth quarter.

On the first play of the next Prior Lake drive, starting at their own 30-yard line, Krouse motioned to his left and took a handoff from Haas on a sweep play, ran around the left end and took off down the sideline before he was finally pushed out of bounds after a 50-yard gain at the STMA 20-yard line.

A run by Shaver, followed by three runs by Miller got the ball into the end zone to cut the lead to 28-27 Knights pending the extra point. However, Keller’s extra point attempt was blocked to prevent the tie with 10:42 to go in regulation, which would turn out to be a key point.

Four plays into the next drive, with STMA facing a third-and-9 at the Laker 49-yard line, Collins took a handoff on a draw play, juked out a Prior Lake defender, spun off another and sprinted into the end zone to extend the STMA lead to 34-27. The Knights then opted to go-for-two and converted on a toss play to running back Max Keefer to make it a two-possession game 36-27 with 9:13 to go.

The following drive was a clinic by Haas, moving the Laker offense down the field with passes to Miller and receiver Kyle McCullough. Haas finished the drive with a 19-yard pass to Miller in the middle of the end zone for another touchdown. Keller’s extra point made the score 36-34 Knights with 6:40 to go.

Perhaps the play of the game came on the next drive, with the Knights facing a second-and-7 at the Laker 38-yard line, Drobinski took the snap, rolled to his left and threw deep to the end zone just as he was hit by linebacker Drew Johnson. Hulting jumped at the goal line and caught the ball over receiver/defensive back Jake Anderson for a Knights touchdown. The extra point extended the Knights lead to 43-34 with 3:49 to go.

Though behind on the scoreboard, the Lakers did not give up the fight, marching down the field in the closing moments, with Keller ultimately kicking a 23-yard field goal with 1:33 to go to get it back to a one-possession game at 43-37.

However, the ensuing onside kick was recovered by the Knights and a personal foul combined with an STMA first down let the Knights run out the clock and seal the victory.

In the loss, Haas completed 16 of 20 passes for 176 yards and three touchdowns.

Defensively, Newlin was the leading tackler with 11 tackles while linebacker Cole Edwards had seven tackles.

Prior Lake will face another tough opponent on their gauntlet of a schedule when they welcome perennial-powerhouse Eden Prairie to Dan Patch Stadium Friday Nov. 5 at 7 p.m.

The Eagles (4-0 Overall, 4-0 Metro West), led by coach Mike Grant, enter the game ranked second in the Star Tribune Metro Top 10 released Nov. 1 while the Lakers are ranked eighth. Note: The Class 6A poll was not yet available when this story was written.

This year’s undefeated Eagles team has thumped opponents in a similar fashion, only allowing 20 total points through four games while scoring 164 points.

Quarterback David Warren-Mitchell has been a contributor through the air and on the ground. He has completed 28 of 41 passes for 586 yards and seven touchdowns with no interceptions. He has rushed for 158 yards and three touchdowns on 22 carries.

Cade Kramer, brother of Minnesota Gophers backup quarterback Cole Kramer, is widely considered as one of the state’s top receivers. Through four games, Kramer has 14 catches for 373 yards and three touchdowns.

As we discussed earlier this season, this year’s playoffs will look a little different than years past due to the shortened season timeline amid the COVID-19 pandemic.

On Oct. 22, the MSHSL listed the following updated playoff information on their website. https://www.mshsl.org/sites/default/files/2020-10/football-section-guidance-and-information.pdf

Under this updated playoff information, as it stands right now, the teams in the smaller classes (9-Man thru Class 5A) would play through a section tournament as we discussed earlier this season; however, teams in Class 6A, which the Lakers are a part of, would be placed in a 31-team bracket like a normal season. However, instead of playing through the bracket completely, teams are limited to a maximum of three playoff games so the season would conclude after the third round of the bracket for the teams that have yet to be eliminated at that point.

As such the three possible playoff rounds will take place on Tuesday Nov. 17, Saturday November 21 and Friday November 27 (Black Friday).

Playoff seeding will occur after the regular season is over (traditionally the morning after) and is strictly based on a vote by the head coaches in each of the four Class 6A sections.

The other teams in Prior Lake’s section, Section 3AAAAAA, include Burnsville, Eagan, Eastview, Farmington, Lakeville North, Lakeville South and Rosemount.

Once the section seeds are voted on and decided by the coaches, they are then sent to the Minnesota State High School League to be entered into one of the four available randomly-picked 31-team brackets.

Those brackets place one team from each of the four sections in a “pod” as it has been referred to in years past, meaning the Lakers could not play a team from their own section until the third round.

One of the top seeds will have an opening-round bye due to one of the sections only having seven teams.

Be sure to check social media for the full bracket and further playoff details following the completion of the regular season next week.

Kickoff vs Eden Prairie on Friday is scheduled for 7pm at Dan Patch Stadium.

If you can’t make it to the game, you can watch the online video stream with Ben Tressel and John Wahlstrom. The stream team will be streaming home games only in 2020 with the host site streaming the away games.

Be sure to check back next week for a recap of the Eden Prairie game as well as a preview of next week’s matchup against Minnetonka.

Reminder: Next week’s game is on Wednesday due to the playoffs beginning on Tuesday the following week.

Follow @plhsfootball, @pl4lstreaming and @pllakers on Twitter for further updates and links to the streams throughout the season. 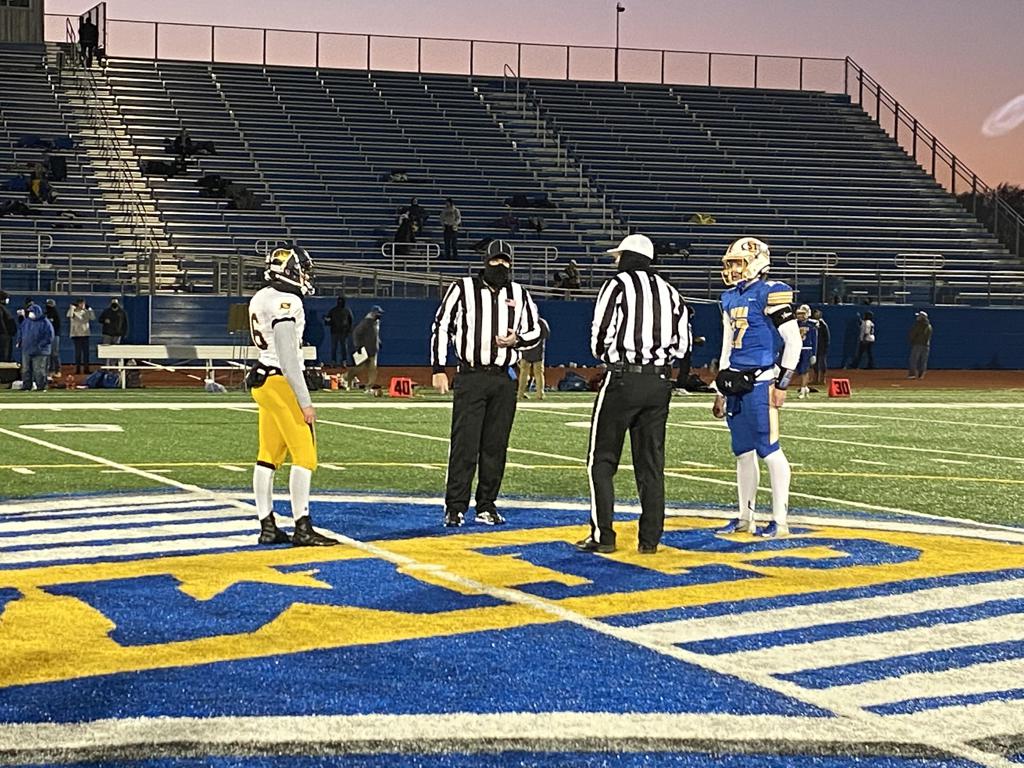