Prior Lake lost a hard-fought game but will need to turn the page quickly to be ready for the Knights.

Running back/receiver Joey Krouse rushed for 107 yards on 11 carries and a touchdown and had a kickoff returned for a touchdown but it wasn’t enough as the Lakeville South Cougars defeated the Prior Lake Lakers 49-35 Oct. 23 at Dan Patch Stadium.

Lakeville South entered the contest as the top-ranked team in the AP Class 6A poll while Lakers were ranked third in the same poll.

Krouse started the scoring for the Lakers with a bang. Krouse took a handoff from quarterback Kyle Haas, maneuvered his way through the Cougar defensive line, broke a pair of tackles in the secondary and beat a Cougar defender to the pylon for a 45-yard touchdown to give the Lakers an early 7-0 lead.

That lead was short-lived however as on the very next drive, Lakeville South running back Carson Hansen answered with a long touchdown run of his own, a 59-yard run out of the Cougars’ T formation offense.

The T formation offense, which Lakeville South adopted a few years ago from Elk River, is hard to defend due to the many fakes by the running backs and it is difficult to know which player actually has the ball.

The Lakers punted on their next possession and Lakeville South responded with a 14-play 76-yard touchdown drive capped by a 5-yard touchdown run by running back Garrett Savard to give the Cougars their first lead of the game at 14-7 early in the second quarter.

Prior Lake responded on the ensuing kickoff when Krouse fielded the ball near his own 8-yard line and took off past Lakeville South defenders, down the sideline and into the end zone. Kicker Josh Keller’s extra point tied the game up at 14.

However, the Cougar offense went back to work with another methodical drive, this time a 10-play 62-yard drive that finished with an 8-yard touchdown run by running back Josh Jacobson on a third down to make the score 21-14 Cougars with 5:34 to go in the half.

Prior Lake answered, in what proved to be a back-and-forth game, with a 12-play 66-yard drive. A key 15-yard run on a toss play to running back Tyler Shaver advanced the ball to around the 5-yard line and on the next play, Haas rolled to his left, threw and connected with tight end/linebacker Tanner Newlin in the flats, who dove across the goal line for the touchdown and tied the game back up at 21 with 1:33 to go in the first half.

It looked as though that would be the score at halftime but Lakeville South was able to move the ball down the field just inside the Laker 30-yard line before Hansen took the ball on a trap play, broke a couple of tackles and went all the way into the end zone for the Cougars to retake the lead with under 30 seconds to go in the half. Lakeville South then opted to go-for-two and converted on a run by Savard, increasing the score to 29-21, which was the tally at halftime.

The Cougars received the ball on the second-half kickoff but the Laker defense forced a three-and-out to get the back to the offense at the beginning of the third quarter.

Unfortunately for the Lakers, the stop became irrelevant a few plays later when, facing a third-and-1 at the Laker 38-yard line, running back/linebacker Cam Miller took a handoff from Haas and looked to pick up the first down but a Lakeville South defender punched the ball out of Miller’s grasp, forcing a fumble and giving the ball back to the Cougars.

In response, the Cougars connected on a pass to get the ball inside the Laker 10-yard line and Hansen scored his third rushing touchdown of the game on a 7-yard run to increase the Lakeville South lead to 36-21 halfway through the third quarter.

Prior Lake would answer with an 8-play 67-yard drive, highlighted by a deep 34-yard completion down the middle of the field from Haas to Shaver to get the ball near the goal line. Haas scored on a quarterback sneak a couple of plays later to cut the Lakeville South lead to 36-28 with 2:05 to go in the third quarter.

The Laker defense got another key stop on the next possession, causing the Cougar drive to stall just across midfield and forcing a punt.

Two plays later, however, Miller took a handoff from Haas and followed the left side of his offensive line but he lost control of the ball as he was being tackled for another fumble that set up the Cougars with great field position deep in Prior Lake territory.

Hansen scored his fourth touchdown of the game a few plays later on an 11-yard touchdown run. The extra point was no good, making the score 42-35 Cougars with 8:22 to go in regulation.

The Lakers got it back to a one-possession game on the next drive, thanks in large part to a key fourth-down conversion on a pass from Haas to receiver/defensive back Jake Anderson on a post route down the middle of the field to move the chains. Shaver then followed with a long run and capped the drive with a 1-yard touchdown run, cutting the Lakeville South lead to 42-35 with 3:53 to go.

A bit of chaos took place on the ensuing kickoff as Prior Lake attempted an onside kick. Keller’s kick went straight up in the air and created a jump-ball of sorts between the Cougars and the Lakers with players ultimately battling in a pile for the ball. However, since the ball was kicked directly into the air, the receiving team must have an opportunity to field the kick (similar to on a punt return) thus kick-catch interference was called and Lakeville South gained possession regardless of who ended up with the ball at the bottom of the pile.

The Cougars ultimately put the game out of reach a few plays later when quarterback Reid Patterson kept the ball on a boot leg, juked out a pair of Laker defenders and ran into the end zone for a 19-yard touchdown to reach the final score of 49-35 with approximately two minutes to go.

Krouse was the leading rusher but Shaver had yet another big day on the ground with 100 yards on 15 carries and a touchdown. Miller had 75 yards on 13 carries.

Newlin was the leading tackler with 16 tackles while defensive back Ryan O’Connor had 10 and linebacker Markus Knudsen had nine.

Next up: St. Michael-Albertville (STMA)

Things don’t get much easier for the Lakers as they travel to St. Michael-Albertville High School (STMA) to take on the Knights on Friday Oct. 30 at 7 p.m.

Friday’s meeting will be only the second meeting on the football field in recent history for the two teams and the first that will take place at STMA.

The first meeting between Prior Lake and STMA occurred last year after the Knights replaced Maple Grove in the Metro West Sub-district, a 20-16 STMA victory at Dan Patch Stadium.

This year’s STMA team has faced tough competition so far this season and has met every challenge to this point. They defeated Shakopee 29-26 in the season opener and they have defeated the two teams that played each other in last year’s state championship game, defeating Wayzata 21-14 in Week 2 and Champlin Park 31-13 last week.

The Knights’ game against Champlin Park last Friday was scheduled just a few hours before kickoff. STMA was originally supposed to play Edina but that game was canceled due to COVID-19 precautions.

STMA is led by their rushing attack, highlighted by running back David Collins. Collins is currently leading the Metro West Sub-district in rushing with 509 yards on 75 carries and seven touchdowns.

Leading the air attack is quarterback and recent Bethel commit Jack Drobinski, who has completed 29 of 53 passes for 401 yards, two touchdowns and an interception.

Running back Max Keefer has been Drobinski’s top target so far this season with seven catches for 156 yards and two touchdowns.

This week is Tackle Cancer Week across Minnesota, benefiting the Randy Shaver Cancer Research and Community Fund. In a normal season, each program would have its own Tackle Cancer game to raise money but due to the COVID-19 pandemic and minimal fans in the stands, Oct. 26 thru Nov. 1 has been deemed Tackle Cancer Week.  Tackle Cancer's slogan for 2020 is "One state, One week, One cause". You can donate to Tackle Cancer at the following link: https://randyshavercancerfund.org/events/tackle-cancer/

Kickoff at STMA on Friday is scheduled for 7 p.m. at St. Michael-Albertville High School.

Since it is an away game, STMA will be providing the stream this week. Per @StmaFB on Twitter, there are a couple stream options available at the moment at https://www.youtube.com/c/STMALive/featured and https://www.nfhsnetwork.com/schools/st-michael-albertville-high-school-saint-michael-mn

Traditionally, there is a fee to pay watch on the NFHS Network.

Follow @plhsfootball, @pl4lstreaming and @pllakers on Twitter for updates and links to the streams throughout the season.

Be sure to check back next week for a recap of STMA game as well as a preview of the matchup against Eden Prairie. 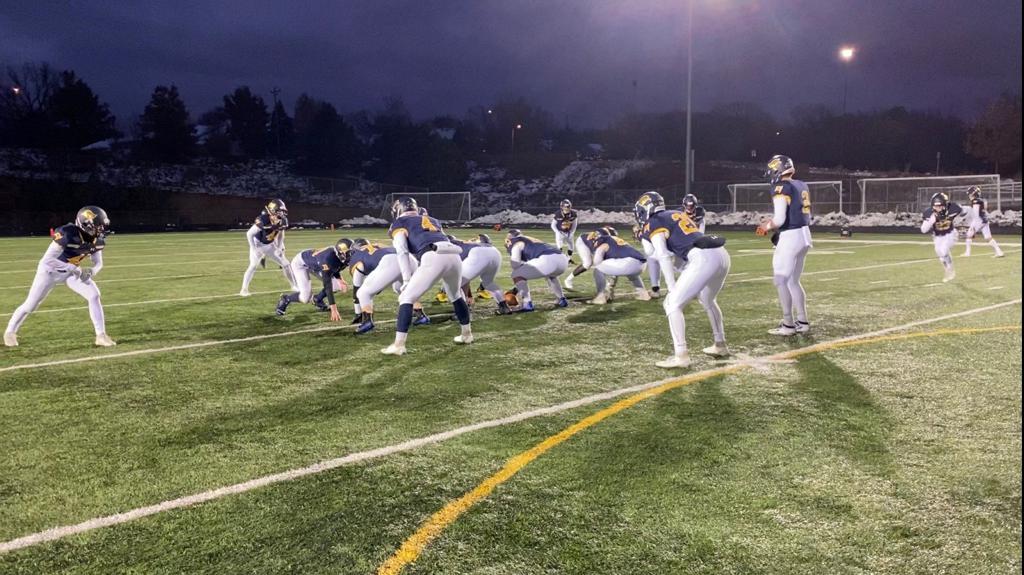