Prior Lake's defense held the Raiders in check and will look to do more of the same at Champlin Park to get back to the state tournament.

The Prior Lake Lakers are one win away from heading to the state tournament after defeating Cretin-Derham Hall Oct. 25 at Dan Patch.

Similar to the prior game against Minnetonka, the Lakers made their presence known early on both sides of the ball.

Prior Lake’s defense forced a three-and-out to start the game and a short punt set the Laker offense up already in CDH territory at the 45-yard line.

The offense then took control, using a strong rushing attack. Back-to-back perimeter run plays by receiver/safety Dylan Bair kick-started the drive and advanced the ball just outside the red zone. A physical run on the next snap by running back/linebacker Tyler Shaver set the Lakers up with first-and-goal before running back/linebacker Sam Emmerich carried the ball twice in a row and rumbled his way into the end zone to give the Lakers an early 7-0 lead less than four minutes in.

It looked as if the Raiders may answer back on the ensuing drive, crossing over midfield, but back-to-back false start penalties derailed the possession and they were forced to punt.

After starting backed up in their own end, the Lakers put together a methodical drive to advance the ball into CDH territory but the Raiders sacked quarterback Kyle Haas on a fourth-and-three to get the ball back.

Despite the stop, the Prior Lake defense stood tall and forced a punt, aided by a key sack on third down.

When they got the ball back, the Laker offense used a variety of rushers to advance the ball across their own 45-yard line before handing the ball to Bair on another perimeter run play. It looked as though the Raiders had the play snuffed out in the backfield but Bair cut back the other direction and took off down the Laker sideline, where he was pushed out of bounds near the CDH 11-yard line.

Back-to-back runs by Emmerich and Shaver advanced the ball down to the 2-yard line and Emmerich added another touchdown run on the next snap, following his blockers on the left side of the offensive line into the end zone. Kicker Josh Keller’s extra point extended the lead to 14-0 with 5:05 to go until halftime.

The defense came up big again on the next possession. CDH moved the ball until they reached midfield when, on a third-and-six, linemen Blake Whaley and Logan Hennen sacked the quarterback deep in the backfield, changing field position and forcing a punt.

The score remained 14-0 at halftime.

The Lakers received the ball to start the second half and looked to take advantage. Facing a second-and-10 near their own 25-yard line, Haas connected with Shaver, who was wide open coming out of the backfield after a CDH defender had fallen. Shaver caught the ball and raced down the Laker sideline. He was finally brought down violently at the CDH 32-yard line, leading to a pair of unnecessary roughness penalties that moved the ball inside the Raider 10-yard line.

Unfortunately for the Lakers, the drive came to a screeching halt on the next play when running back/cornerback Will Jones took the ball on a toss play and raced Raider defenders to the far pylon. Jones was met at about the 4-yard line and juked and jumped for the end zone. No call was made initially but, after a discussion, it was determined that Jones fumbled the ball in the air prior to reaching the goal line and the ball had rolled out the side of the end zone. By rule, the play was ruled a turnover that resulted in the Raiders getting the ball at their own 20-yard line.

Both defenses didn’t allow much of anything on the next couple possessions but it looked like the Lakers were going to have good field possession due to a long punt return by Bair but the Raider tacklers punched the ball out and forced a fumble as Bair was going to the ground, giving the ball back to CDH.

The Raiders took advantage to get back in the game fast on the next snap when CDH quarterback Preston Thelemann completed a long pass deep down the middle of the field to receiver Tre Halloman, who caught the ball over Jones and took off into the end zone to cut the Prior Lake lead to 14-7 with 2:42 to go in the third quarter.

The CDH defense then forced a three-and-out, causing the Laker defense to need what turned out to be the stop of the game on the ensuing drive. After completing a short pass on third down, the Raiders faced a fourth-and-four near midfield. The Raiders brought in backup quarterback Mike Walsh and threw a quick screen pass to the left but safety Austin Gordon read the play perfectly and made the tackle in the backfield to end the drive.

That was not the Raiders final opportunity to tie the game though. With the Lakers facing a third-and-one near the CDH 40-yard line, Emmerich tried to force his way to a first down but CDH knocked the ball out and caused a fumble to give the Raiders the ball back near midfield.

Thankfully for the Lakers, the defense forced a three-and-out and the teams exchanged stops until about midway through the fourth quarter.

Facing a third down-and-eight on the Raider 44-yard line, Haas dropped back to pass and threw a perfect ball to Shaver out of the backfield, who caught the ball along the sideline for a gain of 21 and a first down.

A few plays later came the play that ended up being the difference in the game. Facing a third-and-three on the 16-yard line, Haas connected with Gordon, on a corner route near the goal line for a Laker touchdown. Keller’s extra point was no good but Prior Lake had made it a two possession game at 20-7 with 2:42 to go.

The Raiders weren’t quite done yet though after a long run by running back Tony Underwood got the ball into the red zone. A few plays later, Thelemann connected with receiver Marisellieo Mendez in the end zone for a touchdown to cut the lead to 20-14 with 1:26 to go.

Due to the time remaining, an onside kick was the only hope for the Raiders, an attempt that was smothered by receiver Matt Becker to allow the Lakers to take a knee and run out the clock, securing a 20-14 Prior Lake win.

Statistically, Haas completed four of six passes for 80 yards and a touchdown. Shaver was Haas’ top target with two catches for 63 yards.

Shaver was also the top rusher with 16 carries for 80 yards. Bair had seven carries for 74 yards while Emmerich had 11 carries for 25 yards and two touchdowns.

Defensively, Gordon and lineman John Brennan each had eight tackles while Hennen had seven and Bair and Nick Theis each had six.

Next up: Champlin Park

The Lakers will look to do something they have never done before, clinch a state tournament berth on the road, when they head north to take on the top-seeded Champlin Park Rebels Nov. 1.

Prior Lake has played in the “winner-goes-to-state” round, previously and still commonly referred to as the section final, every season since 2011. The Lakers have advanced to state four times during that span, with all section final wins coming at home and all section final losses coming on the road.

If the Lakers are to buck that trend, it will come against another new opponent that they have never faced in Champlin Park.

The Rebels (7-1 overall, 5-1 Metro North) are the top seed out of Section 5AAAAAA and did not play last week after they received the only bye in the tournament.

Champlin’s offense traditionally has centered around their two-headed rushing attack this reason. Running back Shawn Shipman carried much of the load with 930 yards on 180 carries and eight touchdowns. Also contributing to that rushing attack is quarterback Jaice Miller, a 6’4” great athlete that moved from receiver to quarterback prior to this season. Miller has run for 456 yards on 76 carries and two touchdowns as the signal caller.

Though he’s a good runner, Miller is not afraid to throw the ball either, completing 62 of 133 passes for 1,068 yards with 12 touchdowns and six interceptions.

The Rebels top receiving threat this season has been receiver Brock Johnson with 25 catches for 535 yards and six touchdowns. Receiver Dom Witt is another pass-catching option who has 15 catches for 197 yards and four touchdowns.

The winner of Friday’s game will advance to take on the winner of Rosemount/Eden Prairie in the state quarterfinals on Thursday Nov. 7 at Park Center High School.

There WILL be an online video stream this week! Thanks to our sponsors who stepped up to cover the increased fees associated with broadcasting playoff games!

Be sure to check back next week for a recap of the Champlin Park game and, if the Lakers advance, a preview of the state quarterfinal matchup. 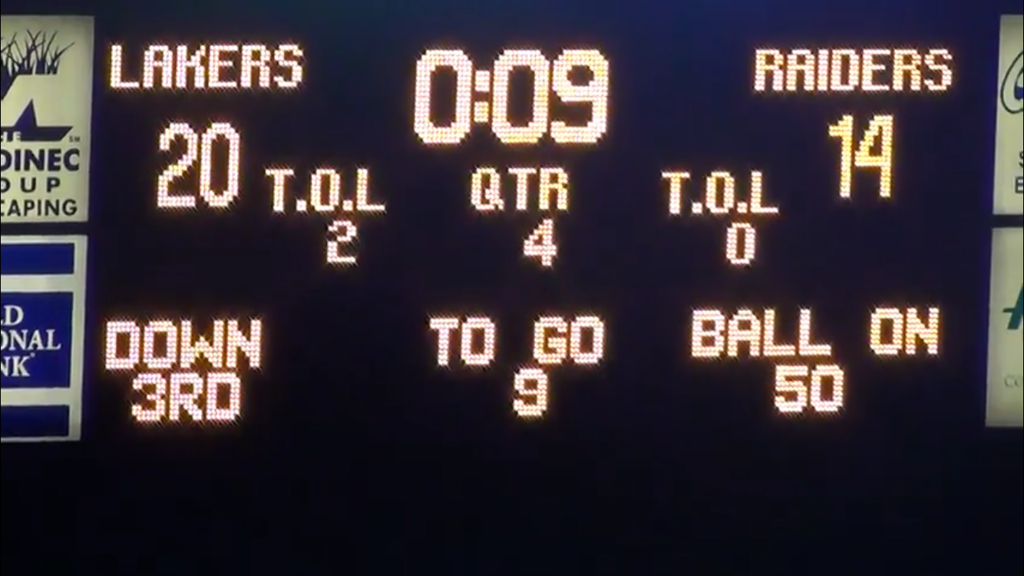