Lakers roll past Minnetonka to snap losing skid; host Cretin-Derham Hall in opening round of playoffs

Prior Lake took care of business against Minnetonka and will now face an unfamiliar opponent, CDH, in the first round of playoffs

The Prior Lake Lakers got back to their roots with a strong rushing attack and tough defense as they charged to a 24-7 win over the Minnetonka Skippers Oct. 16 at Dan Patch Stadium.

Prior Lake took control right from the start, with the defense forcing a three and out on the Skippers opening possession. The Laker offense then got the upper hand, putting together an 8-play 87-yard drive to give the Lakers an early 7-0 lead.

The Laker drive was highlighted by a 12-yard run by quarterback Kyle Haas, a 19-yard run by running back/linebacker Tyler Shaver and a pair of completions from Haas to receiver Dylan Bair, the latter of which was a throw to the flats where Bair caught the ball, weaved his way through defenders and pushed his way into the end zone for a 23-yard touchdown.

The score remained 7-0 Lakers into the early part of the second quarter. The Skippers moved the ball just outside of the Prior Lake red zone before the Laker defense held, forcing a 41-yard Minnetonka field goal attempt that fell just short of the crossbar.

Sensing a shift in momentum, the Laker offense went back on the attack. After a pair of runs from Shaver and running back/linebacker Sam Emmerich, Haas connected on a deep ball down the middle of the field to tight end Cam Miller, who caught the ball over a pair of Skipper defenders and was brought down at the Minnetonka 20-yard line.

On the very next snap, Bair took the ball on a toss play to his right. It looked as though Bair would gain about 5-yards but he cut back to his left and took off all the way to the end zone for a Laker touchdown, his second of the night. Kicker Josh Keller’s extra point extended the Laker lead to 14-0 with 7:15 to go until halftime.

The Skipper offense answered back quickly, however, when quarterback Joe Gendreau found receiver Jaxen Iverson open over the middle on the first snap off the ensuing possession for what turned into a 52-yard gain and could have been a touchdown if not for a tackle by cornerback Will Jones inside the Prior Lake 15-yard line.

Minnetonka scored a few plays later on a 2-yard touchdown run by running back Ben Tolkinen to cut the Laker lead to 14-7 with 4:50 remaining in the first half.

Prior Lake’s offense then looked poised for an answer of their own just before half with a methodical drive, aided by a long run from Shaver and a key slant pass from Haas to receiver Parker Ellis that got the ball into the red zone.

It looked as though Bair had scored his third touchdown of the game a couple plays later, running into the end zone after taking the ball on a reverse but Prior Lake was called for a block in the back penalty downfield, negating the score. With the clock winding down, Prior Lake had to settle for a 32-yard field goal attempt by Keller. The kick sailed wide left, keeping the score 14-7 at halftime.

The Laker offense was stopped on a fourth down attempt on their first possession of the second half and the Skippers looked to capitalize. A pair of runs by Tolkinen and a completion to receiver Tyler Lien advanced the ball deep into Prior Lake territory.

Prior Lake’s defense held and forced a field goal attempt. It appeared as though Minnetonka had made the field goal but the Lakers were offside and the officials had blown the play dead. After the penalty was enforced, the next field goal attempt sailed wide right and the score stayed 14-7 Lakers with 4:17 to go in the third quarter.

Just like the prior missed field goal attempt, Prior Lake’s offense tried to use the momentum to its advantage, starting the drive with a 20-yard run by Emmerich in which he was breaking tackles and dragging defenders.

Later in the drive, Shaver broke off a 20-yard run of his own, spinning off Skipper defenders and taking off down the Laker sideline, setting up the Prior Lake offense with a first-and-goal. The Lakers were unable to get into the end zone as the fourth quarter began but a 21-yard field goal by Keller extended the Prior Lake lead to 17-7 with 11:43 to go in regulation.

A defensive stop by the Prior Lake defense set up what turned out to be the put away drive by the Laker offense.

After a pair of hard runs by Emmerich got the ball across midfield, Haas took a shot to the end zone, trying to connect with Ellis on a fade route. There was contact on the play and, after a discussion, the officials determined that Ellis initiated the contact and he was called for offensive pass interference.

Despite the pass interference penalty, Bair made up for it on the next play, taking the ball on another reverse and gaining nearly 30 yards and moving the ball deep into Skipper territory near the 26-yard line. Four plays later, Emmerich capped the drive and the game with a 3-yard touchdown run.

Statistically, Emmerich and Shaver led the Lakers on the ground. Emmerich rushed for 123 yards and a touchdown on 18 carries. Shaver rushed for 115 yards on 17 carries.

Haas completed 6 of 7 passes for 113 yards and a touchdown while Bair was his top receiver with two catches for 38 yards.

Linebacker Tanner Newlin was the top tackler with 11, while Emmerich had nine tackles and safety Nick Larson had eight.

Up next: Cretin-Derham Hall (CDH)

Prior Lake was voted the 4 seed by the Section 3AAAAAA coaches and will host the Cretin-Derham Hall Raiders, the 5 seed out of Section 4AAAAAA, in the first round of the playoffs Oct. 25 at Dan Patch Stadium.

Friday’s matchup may be the first ever matchup between the two teams, certainly the first since the Matt Gegenheimer era began in 2006.

CDH’s offense is highlighted by star running back Tony Underwood, who has rushed for 926 yards and four touchdowns on 177 carries so far this season. Underwood is also the Raiders top receiving threat with 23 catches for 387 yards and three touchdowns.

Quarterback Preston Thelemann has been the signal caller all season for the Raiders, completing 107 of 180 passes for 1,432 yards with 12 touchdowns and three interceptions.

The winner between the Lakers and the Raiders will go on the road to take on top-seeded Champlin Park, who received a first round bye, on Nov. 1.

Kickoff against Cretin-Derham Hall on Friday is scheduled for 7 p.m. at Dan Patch Stadium.

NOTE: As of 10/24, this week’s game will NOT be streamed “due to a dramatic increase in fees” according to the @pl4lstreaming Twitter page.

Be sure to check back next week for a recap of the Cretin-Derham Hall game and, if the Lakers advance, a preview of the Round 2 matchup against Champlin Park. 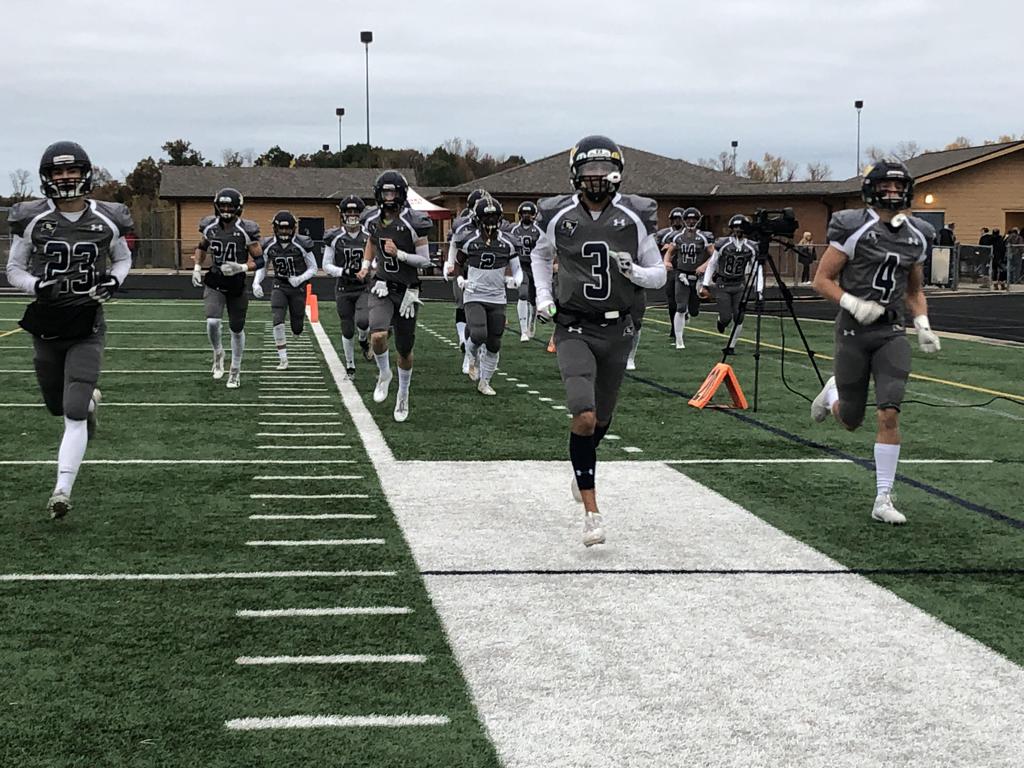