The St. Michael-Albertville Knights marched down the field on a nine-play 69-yard touchdown drive in the final three minutes to defeat the Prior Lake Lakers 20-16 Oct. 4 at Dan Patch Stadium.

The victory for STMA (5-1 overall, 4-1 Metro West) moves them into sole possession of second place in the Metro West while Prior Lake (3-3 overall, 2-2 Metro West) is tied for third with upcoming opponent Eden Prairie.

The game started with some excitement for the Lakers right on the opening kickoff when kicker Josh Keller’s low kick caused the ball to bounce away from the STMA returners. After the ball was muffed by the Knights, Logan Hennen jumped on the football, giving Prior Lake possession inside the STMA 30-yard line.

Prior Lake then used their traditionally reliable run game to make their way down the field and running back/linebacker Tyler Shaver capped the drive with a 4-yard touchdown run in which he took a handoff from quarterback Nate Raddatz, followed the left side of the offense line and dove across the goal line to give the Lakers an early lead. Keller’s extra point made the score 7-0 Lakers less than four minutes into the game.

Both defenses then went to work, with neither offense able to muster much of anything for the remainder of the opening quarter.

The first momentum shift came early in the second quarter. After long runs by receiver/safety Dylan Bair and running back/cornerback Will Jones got the ball into STMA territory, the Prior Lake offense stalled and Keller lined up for a 37-yard field goal. Keller’s attempt was no good as it appeared to sail just right of the goal post.

Sensing a shift in the momentum, STMA attacked on the very next play as quarterback Kolby Gartner connected with receiver Brandon Langdok deep down the middle of the field. Langdok caught the ball and took off into the end zone for an 80-yard touchdown. Prior Lake maintained a 7-6 lead, however, after the Knights opted to go-for-two and were unsuccessful.

Again, the defenses took control for the remainder of the first half but it wasn’t without excitement.

With Prior Lake in possession near midfield inside the final two minutes of the half, Raddatz ran to his left on a draw play and was hit, knocking the ball loose. The Knights jumped on the ball to gain possession.

That possession however was very short-lived as, on the next snap, Gartner tried to throw to his right but linebacker DJ Doyen was there waiting for it. Doyen intercepted the pass and returned it 48-yards for a Laker touchdown. Prior Lake’s two-point conversion pass was unsuccessful so the score was 13-6 Lakers with 1:32 to go in the half.

The Laker defense bent but didn’t break on the ensuing drive before halftime as the Knights marched into the Prior Lake red zone in the final seconds but a 30-yard field goal attempt landed wide right as time expired in the half.

The defenses stood tall again on the first few drives of the second half with the first big play going the way of the Knights. Facing a second-and-long in their own end, Laker quarterback Kyle Haas, who came in for Raddatz for that drive, threw a deep fade route down the Prior Lake sideline intended for receiver Parker Ellis but the ball was intercepted by STMA and returned inside the Laker 10-yard line. A couple plays later, STMA running back David Collins had a 3-yard touchdown run to tie the game at 13.

The Lakers responded however with a methodical drive to regain control. Runs from a plethora of Laker players and a couple key completions from Raddatz to Bair got the ball to the STMA 25-yard line. The drive stalled but Keller connected on a 42-yard field goal that just cleared the crossbar, giving the Lakers a 16-13 lead less than a minute into the fourth quarter.

Both teams exchanged defensive stops one more time before what turned out to be the game-winning touchdown drive.

On that drive, the Knights converted on a pair of third downs and the drive was capped when Gartner found receiver Kale Hoselton in the end zone for a 15-yard touchdown to give the Knights their only lead of the game 20-16 with 2:56 to go.

Prior Lake did not go down without a fight however as the Lakers put together another methodical drive, mixing runs and passes to give themselves a chance in the closing seconds.

Getting as close as the 24-yard line on a third-and-8, Raddatz threw deep down the middle of the field, looking for Ellis near the goal line.

The Lakers had one final shot on fourth down as Raddatz threw deep down the STMA sideline looking for Bair near the back pylon. It looked for a moment as if it may be a go-ahead touchdown but the officials signaled incomplete, turning the ball over on downs to the Knights, who ran out the clock.

Shaver was the leading rusher with 17 carries for 50 yards and a touchdown. Raddatz had 10 carries for 47 yards.

Bair was the leading receiver with 6 catches for 38 yards.

It will be no easy task for the Lakers as they try to end their two-game losing streak this Friday on the road at perennial-powerhouse Eden Prairie.

Like the Lakers, this year’s Eden Prairie team is also coming off back-to-back losses. The Eagles fell to Edina 21-14 last week and 17-7 to Wayzata in the week prior.

The Eagles rely primarily on their ground attack to generate offense. Running back Johnny Hartle is the Eagles' leading rusher with 457 yards on 86 carries and two touchdowns. Fullback Fred Zach has been Eden Prairie’s scoring leader with six touchdowns on the year to go along with 173 yards on 56 carries. Running back Sam Thomas has contributed on the ground as well with 219 yards on 29 carries.

Receiver Cade Kramer has been by far the top receiving target for the Eagles with 21 catches for 323 yards and a touchdown.

Kickoff at Eden Prairie on Friday is scheduled for 7 p.m.

Be sure to check back next week for a recap of the Eden Prairie game as well as a preview of the matchup against Minnetonka.

Reminder: Next week’s game against Minnetonka will be played on Wednesday due to MEA. 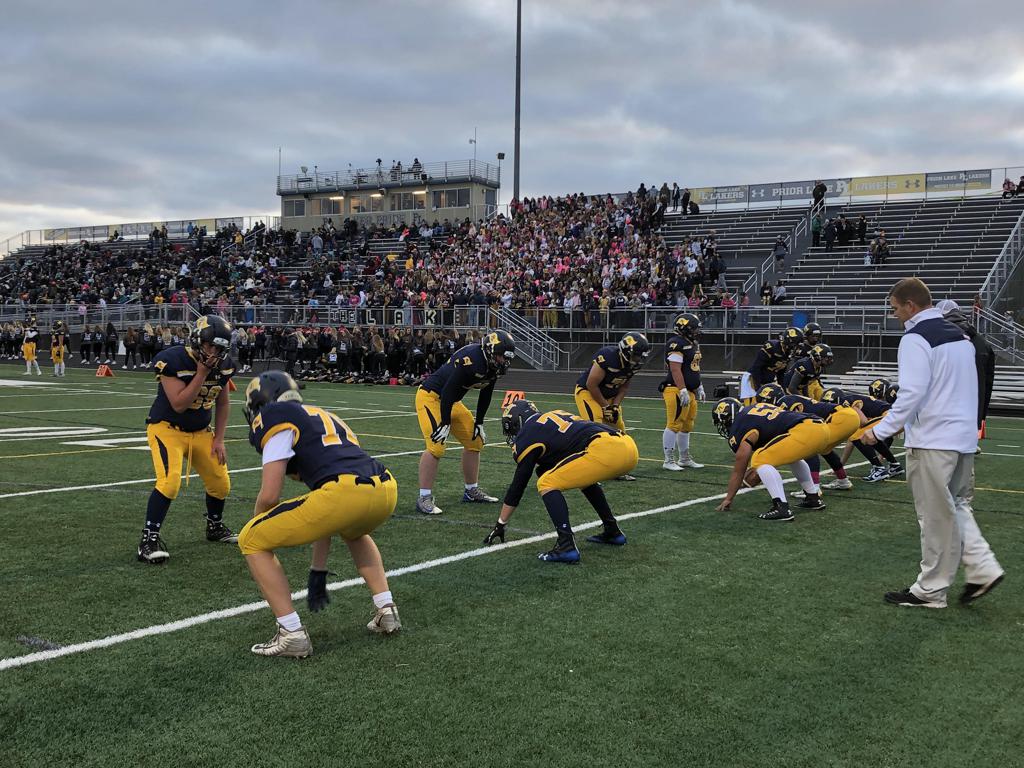