Lakers grounded by Lakeville South; homecoming vs STMA up next

An early lead was key for the Cougars to use their time of possession strategy. They struck quickly, with Lakeville South running back Johnny Shabaz breaking off a 65-yard run on a third-and-10 on the opening drive. A few plays later, Shabaz scored on another inside run play from 12-yards out, giving the Cougars a 7-0 lead before Prior Lake even touched the ball.

Bair had a 33-yard run on a toss play on the ensuing Laker drive that got the ball into Cougar territory but the possession ultimately stalled and Prior Lake was forced to punt.

The Prior Lake defense then forced a three-and-out to get the ball back to the Laker offense near midfield. An 18-yard run by Tyler Shaver got the ball inside the Cougar 30-yard line but the drive ultimately came to a halt when quarterback Nate Raddatz completed a pass to Will Jones on a fourth-and-8 and Jones was unable to reach the first down marker.

Both teams exchanged defensive stops, resulting in Lakeville South starting with the ball near midfield in the second quarter.

The Cougars then put together a methodical 8-play touchdown drive, capped with a 1-yard touchdown run by Shabaz, making it 14-0 Cougars.

The teams then traded three-and-outs, including a big stop by the Laker defense to keep the game within reach.

Prior Lake’s offense then started to heat up. Back-to-back long runs by Raddatz and Bair got the Lakers deep into Cougar territory. With time running out in the half, Josh Keller’s 32-yard field goal was good to cut the Cougar lead to 14-3 at the break.

The Lakers rode the momentum from the field goal drive into the second half and the Laker offense quickly made a statement when Bair took the handoff on a jet sweep, weaved his way through defenders and showed off his speed, sprinting into the end zone for a 69-yard touchdown. Keller’s extra point made the score 14-10 Cougars just seconds into the third quarter.

However, that was all the closer the Lakers would get as the Cougars responded with an 8-play 75-yard touchdown drive, highlighted by a 34-yard run by Shabaz to regain control 21-10.

The Prior Lake offense went three-and-out on the next drive.

The Cougars then extended their lead on the ensuing possession with a 7-play 70-yard touchdown drive. That drive was capped by a 5-yard touchdown run by Cougar quarterback Reid Patterson, who extended the ball across the goal line on a boot play to make the score 28-10 Cougars late in the third quarter.

Though down 18 points, the Laker offense wasn’t done yet and responded with perhaps their best drive of the game, an incredible and methodical 19-play 80-yard touchdown drive finished with a 6-yard run, cutting the lead to 28-17 midway through the final quarter.

However, it was too-little-too-late for the Lakers as Keller’s ensuing onside kick was unsuccessful and the Cougars then worked their way down the field for one final touchdown to put the finishing touch on the game with the final score 35-17.

While Bair was the leading rusher, Shaver also had a noteworthy performance with 70 yards on 13 carries.

Raddatz completed 4 of 9 passes for 27 yards. Bair was the leading receiver.

Sam Emmerich led the Lakers in tackles with 13 while Bair had 11.

Next up: St. Michael-Albertville (STMA)

The Lakers will have their hands full trying to get back in the win column this week as they welcome the third-ranked STMA Knights to Dan Patch Stadium for this year’s homecoming game.

Friday’s matchup will be the first between the Lakers and the Knights since STMA made the jump from Class 5A to Class 6A in 2017.

The Knights were previously a traditional powerhouse in the state’s second biggest class before moving up and hasn’t missed a step since, making the Class 6A state quarterfinals in 2017 and 2018.

This year’s STMA team (4-1 overall, 3-1 Metro West) has looked like a strong contender to get back to state once again. The Knights defeated Edina 34-29 in a shootout in Week 5 after narrowly losing to Wayzata 28-18 the week prior. STMA opened the season with wins 27-6 over Maple Grove, 21-14 over Minnetonka and 35-7 over Shakopee.

Offensively, the Knights have been known to use a balanced run and pass attack.

Receiver Brandon Langdok has been Gartner’s top target with 15 catches for 316 yards and three touchdowns. Langdok, who is also a member of STMA’s track and field team, could also see some time in the backfield at running back.

Running back David Collins has carried the STMA rushing attack this season with 100 carries for 605 yards and four touchdowns.

Kickoff vs STMA at Dan Patch Stadium on Friday is scheduled for 7 p.m.

Be sure to check back next week for a recap of the STMA game as well as a preview of the matchup against Eden Prairie. 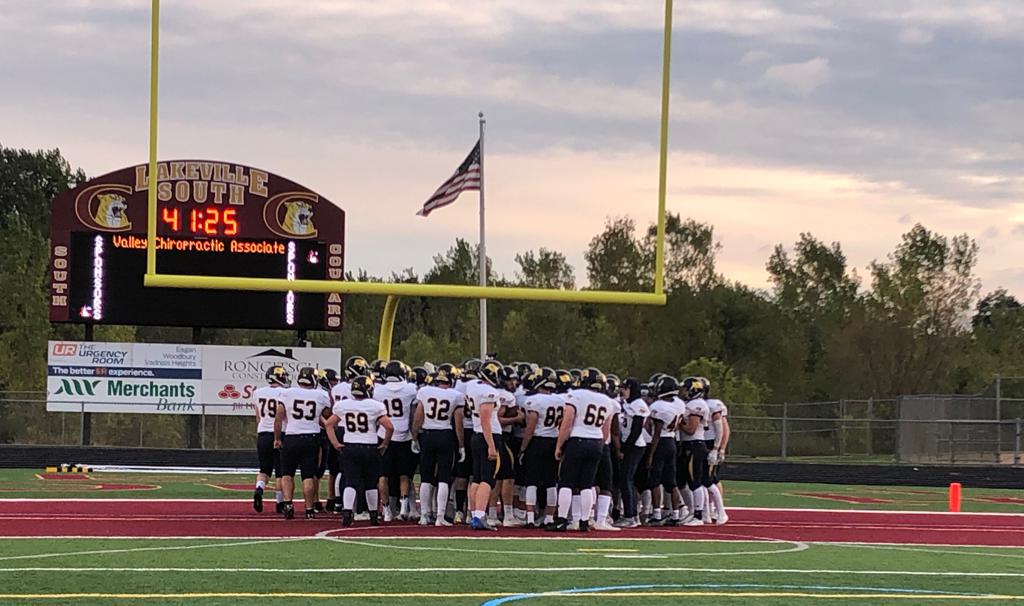