Prior Lake came from behind to beat the Hornets; they hope they won't need to do so again against the Cougars

Will Jones scored a 4-yard touchdown with 2:18 left in regulation to lead the Prior Lake Lakers to a 27-24 win over the Edina Hornets Sept. 20 at Kuhlman Field in Edina.

Jones caught the ball on a toss play to his left, followed his blockers and beat the Hornet defenders to the pylon.

Though they needed a comeback to win, the Lakers started strong against the Hornets. The Prior Lake defense forced a three-and-out to start the game and a short punt set the Lakers up already in Edina territory.

Four plays later, quarterback Nate Raddatz connected with fullback Cam Miller on a seam route down the middle of the field for a 21-yard touchdown. Kicker Josh Keller’s extra point made it 7-0 Lakers less than five minutes into the game.

Edina looked to respond quickly, completing a fade route for a near 40-yard gain early in the ensuing drive, getting the Hornets into Laker territory.

However, the Laker defense stopped the threat when safety Dylan Bair made a huge tackle on a fourth down-and-two, stopping the Hornet running back a yard short of the first down marker and getting Prior Lake the ball back.

It seemed as though Prior Lake had gained the momentum back but that shifted once again two plays later when Raddatz threw to his right, looking for receiver Jake Anderson. Raddatz's pass was intercepted by a Hornet defender and returned for a touchdown. The extra point was unsuccessful, leaving the Laker lead at 7-6 with 3:08 to go in the first quarter.

Despite the turnover for a touchdown, Prior Lake responded with an 80-yard touchdown drive to take back control. Anderson made a diving catch on a third down throw from quarterback Kyle Haas, who relieved Raddatz throughout the game, to continue the drive.

The key play came later in the drive on the first play of the second quarter when, facing a fourth down-and-one at the Hornet 47-yard line, the Lakers decided to go for it. Haas took the snap, faked a handoff to running back Tyler Shaver and threw to receiver Parker Ellis, who was wide open to his right. Ellis caught the ball and followed a strong block from Anderson all the way into the end zone for a 47-yard touchdown to extend the Laker lead to 14-6.

In what was becoming a back-and-forth game, Edina put together a touchdown drive of their own on the ensuing possession.

Late in the drive, following a timeout and facing a fourth-and-eight, Edina was able connect on a wheel route to the running back. Prior Lake was unable to make a tackle after the catch, resulting in an Edina touchdown. Edina attempted to go for two to tie the game but the conversion was not successful so the score stayed 14-12 Lakers with 6:09 to go until halftime.

It looked as if Edina may take the lead late in the first half but the Lakers flipped the script. Following the touchdown, the Hornet defense forced a three-and-out and then blocked punter/linebacker/running back Sam Emmerich’s punt, setting Edina up deep in Laker territory. A few plays later, the Edina quarterback threw to his right but his pass was deflected up in the air by lineman Blake Whaley and the ball fell into the waiting arms of linebacker Tanner Newlin. Newlin took off down the Laker sideline and ran all the way into the end zone for an 85-yard pick six. Keller’s extra point attempt fell short of the crossbar, keeping the score 20-12 Lakers, the score at halftime.

After Prior Lake went three-and-out on their first drive of the second half, Edina got back into the game with big play connecting on a deep pass for a 58-yard touchdown. Again the Hornets tried to go for two to tie the game but the pass fell incomplete, keeping the score 20-18 Lakers with 8:36 to go in the third quarter.

The Lakers went three-and-out on their next drive as well. Edina capitalized with a 16-play 65-yard drive. The Hornets effectively mixed run and pass plays and capped the drive with a 1-yard touchdown run to take their first lead of the game on the opening play of the fourth quarter. Edina’s two-point try was unsuccessful but they had the lead 24-20 with 11:57 to go in regulation.

The defenses took over for the next few drives, with neither offense gaining many yards and the teams trading punts.

Perhaps the play of the game came with around 5 minutes to go in regulation when the Hornets had the ball and were nearing a point where they could start trying to run out clock.

Edina faced a third down-and-eight on their own 22-yard line. Quarterback Noah Sandven dropped back to pass but Whaley pushed his way through the Hornet offensive line, sacking Sandven near the 10-yard line and forcing a punt.

The ensuing punt was a bit of a line drive, fielded by Bair near the Hornet 40-yard line and returned all the way inside Edina’s 20-yard line to set up the Laker offense.

A few plays later, a key third down completion from Raddatz to Bair got Prior Lake down to the 6-yard line.

Shaver provided the exclamation point to secure the victory on the ensuing Edina drive, when he blitzed from his linebacker position and hit Sandven as he dropped back to pass. The hit knocked the ball loose and Whaley jumped on the football, officially putting the Lakers in the win column.

Statistically, the passing numbers were split between Haas and Raddatz. Haas completed 3 of 4 passes for 65 yards and a touchdown while Raddatz completed 5 of 7 passes for 47 yards, a touchdown and an interception.

The rushing attack was spread among a handful of players with Shaver being the leading rusher with seven carries for 30 yards.

Ellis led the team in receiving with two catches for 59 yards.

Shaver and linebacker DJ Doyen led the Lakers in tackles with six apiece.

Next up: Lakeville South

The Lakers will matchup with an old foe when they travel to Lakeville South on Friday night.

The two teams used to play against each other regularly in the South Suburban Conference prior to the MSHSL transitioning from conferences to districts for football.

Prior Lake is now a member of the Metro West subdistrict while Lakeville South resides in the Metro South subdistrict.

While Friday’s game is a non-subdistrict game, the Lakers and the Cougars both reside in Section 3AAAAAA. This means that the two teams will be seeded for the playoffs against each other based on a coaches’ vote at the end of the regular season. A head-to-head victory could go a long way in determining who is seeded higher for the playoffs.

The Lakers enter Friday’s matchup ranked sixth in the Associated Press Class 6A rankings, while the Cougars are ranked seventh in the same poll.

The Cougars (3-1 overall, 2-1 Metro South) defeated Eastview last week 14-7. They also have wins over Burnsville 35-7 in Week 3 and Totino-Grace 13-10 in Week 1. Lakeville South’s only loss this season came against Rosemount 17-14 in Week 2 when the Cougars had a game-tying field goal attempt blocked in the closing seconds.

Offensively, Lakeville South is led by a strong rushing attack out of a T formation, which often features three running backs lined up in a row a few yards behind the quarterback to form the shape of a “T”.

Quarterback Reid Patterson is also a rushing threat with 31 carries for 121 yards and two rushing touchdowns. He has completed 21 of 46 passes for 323 yards and three touchdowns with no interceptions.

Reciever George Brekke is Patterson’s top target with seven receptions for 176 yards and one touchdown. Shabaz has also contributed with eight catches for 122 yards.

The Cougar offense has only turned the ball over once this season, a fumble in the season opener against Totino-Grace.

Lakeville South offensive coordinator Ben Burk will be the interim head coach according to the team’s website.

Kickoff at Lakeville South on Friday is scheduled for 7 p.m.

Be sure to check back next week for a recap of the Lakeville South game as well as a preview of the homecoming matchup against St. Michael-Albertville. 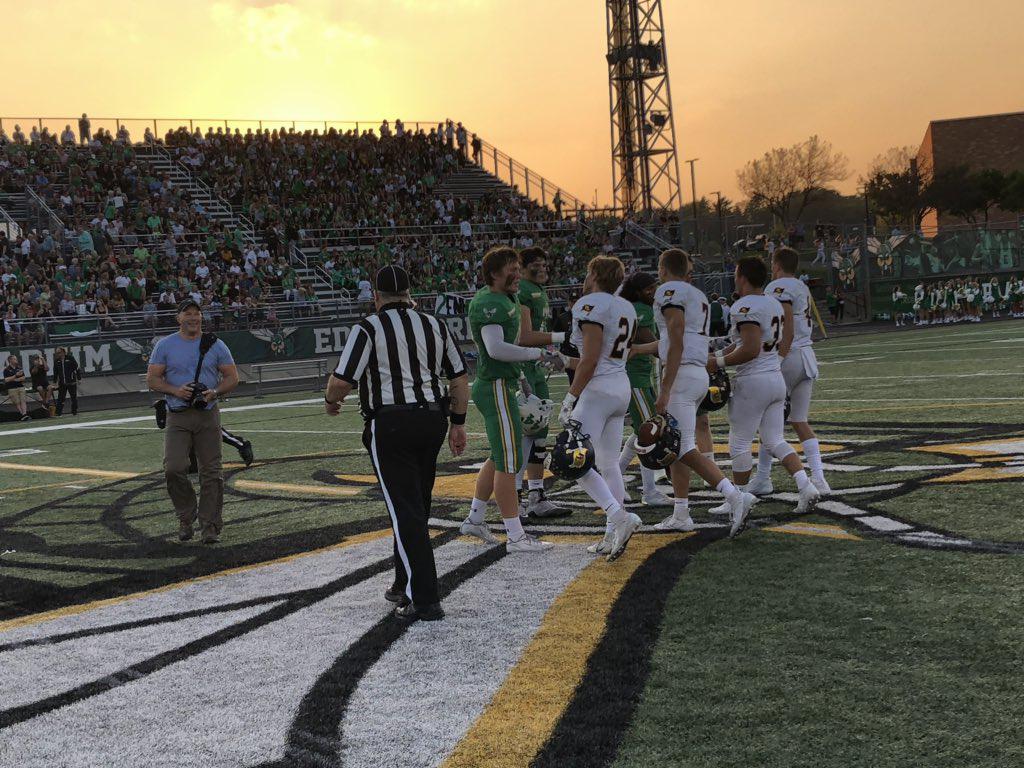