Lakers fall in hard-fought battle to Wayzata, trip to Edina ahead

The Wayzata Trojans marched down the field on a 19-play 95-yard touchdown drive in the closing minutes to rally past the Prior Lake Lakers 14-10 September 13 at Dan Patch Stadium.

The victory for the Trojans (3-0 overall, 2-0 Metro West) puts them tied atop the Metro West Subdistrict standings with St. Michael-Albertville, a half-game ahead of Eden Prairie and a full game ahead of the Lakers (2-1 overall, 1-1 Metro West).

Wayzata got on the board first on their second drive of the game, an 89-yarder, highlighted by a 25-yard run by Trojan running back Christian Vasser. Vasser finished the drive with a 2-yard touchdown run to put Wayzata up 7-0 on the first play of the second quarter.

It looked as if the Lakers had struck right back when cornerback/running back Will Jones caught the ensuing kickoff near his own 10-yard line, weaved his way through Trojan defenders and took off down the Wayzata sideline into the end zone for what looked like a game-tying touchdown. Unfortunately for Prior Lake, Jones was ruled out of bounds by the officials at the Trojan 43-yard line.

Though the touchdown was nullified, the Lakers didn’t lose momentum. Prior Lake quarterback Nate Raddatz connected with running back Tyler Shaver on a pair of 11-yard pass plays to get the Lakers into field goal range. Kicker Josh Keller connected on a 34-yard field goal a few plays later to get Prior Lake on the board and cut the Trojan lead to 7-3 with 8:19 to go before half.

The Trojans mounted a late first half drive, facing a fourth and 5 on the Laker 35-yard line with five seconds to go in the half. A deep pass down the sideline looked to be intercepted by safety Austin Gordon as time expired, however, pass interference was called on the play, giving the ball back to Wayzata for one final play before halftime. The Trojans tried to complete a pass near the goal line but it was broken up by safety Austin Gordon. The Trojans led 7-3 at half.

Neither team mustered anything on their first drive of the second half but the Lakers caught a break when linebacker/running back/punter Sam Emmerich’s punt was dropped by the Trojan returner. Laker lineman John Brennan jumped on the ball to give Prior Lake possession deep in Trojan territory at the 28-yard line.

The offense quickly responded two plays later when Raddatz connected with receiver Parker Ellis, who leapt high in the air and caught the ball deep down the Wayzata sideline, coming down at the 1-yard line. Shaver plunged into the end zone on the next play to give the Lakers their first lead of the game. Keller’s extra point was good and Prior Lake led 10-7 with 8:29 to go in the third quarter.

Both teams exchanged defensive stops before Wayzata got the ball back deep in their own end to begin what turned out to be the game-winning drive.

While Vasser was a big part of the long drive, the Trojans were able to convert a couple of third downs through the air to keep the drive moving across midfield.

After Vasser, rattled off a 17-yard run to get inside the Laker 30-yard line, Prior Lake’s defense did its best to make one last stand. Facing a third down and 7 at the Prior Lake 24-yard line, the Trojans attempted to throw the ball deep to the end zone and the pass landed incomplete. Unfortunately for the Lakers, pass interference was called on the play, giving Wayzata a first down and extending the drive.

While it was a tough blow, the Lakers were not done yet. On the first play of the ensuing drive, Raddatz found receiver Jake Anderson on a pass to get the ball across the 40-yard line. A pass to Ellis and a run by Shaver got the Lakers across midfield. Prior Lake went backward on the next play due to a block in the back penalty but was able to regain those yards on a completion to Anderson.

Prior Lake appeared to gain another first down on the next snap, a long run down to the Wayzata 31-yard line. However, a 15-yard chop block penalty was called, negating the play and essentially sealing the Lakers’ fate in the final minute. Prior Lake was also given an unsportsmanlike penalty following the play, backing up the offense more. Raddatz threw an interception two plays later on a desperation play and Wayzata took a knee to run out the clock.

Statistically, Raddatz completed 12 of 19 passes for 124 yards and two interceptions.

Shaver was the leading rusher with 17 carries for 79 yards.

Defensively, Dylan Bair was the leading tackler with 12 tackles. Emmerich had eight tackles and a host of Lakers had seven.

The Lakers will look to get back in the win column Friday night when they travel to Edina to take on the Hornets.

The Hornets are highlighted on offense by receiver Hamza Malim, who has 12 catches for 168 yards and a touchdown.

Edina quarterback George Sandven has completed 25 of his 46 passes for three touchdowns and one interception.

Friday’s meeting between the Lakers and the Hornets will be the first between the two teams since 2016, a 30-0 Laker win at Dan Patch Stadium.

Kickoff at Edina on Friday is scheduled for 7 p.m.

Be sure to check back next week for a recap of the Edina game as well as a preview of the upcoming matchup against Lakeville South. 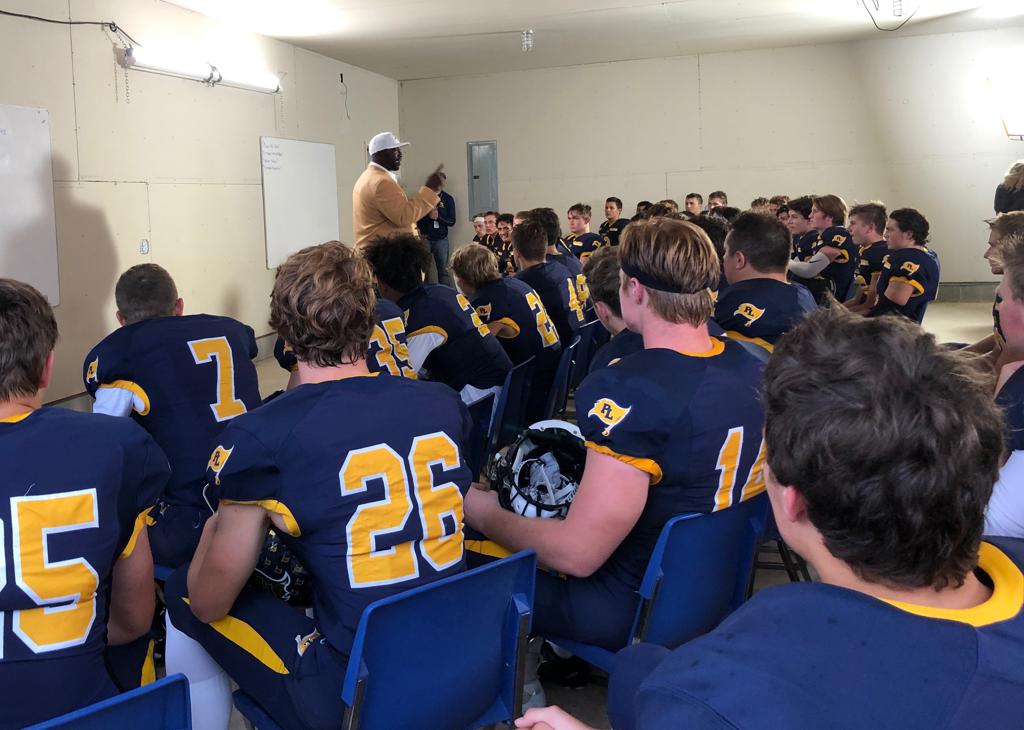 NFL Hall of Famer and Viking legend John Randle addressed the Lakers prior to the game against Wayzata.