The Prior Lake Lakers scored 14 first half points and got a defensive stand in the final minute to defeat the rival Shakopee Sabers 14-12 at Vaughn Stadium September 6.

Prior Lake (2-0 overall, 1-0 Metro West) and Shakopee (1-1 overall, 0-1 Metro West) have a long-standing rivalry dating back to when both teams played in the now-defunct Missota Conference and continued in recent seasons since Shakopee joined the South Suburban Conference in 2014.

Friday’s game was the first between the two teams in the newly-realigned Metro West Subdistrict.

The Lakers struck first on their second drive of the game. Aided by runs of 17 and 10 yards by running back Tyler Shaver, the Prior Lake offense put together a nine-play 40-yard drive capped off with a 4-yard touchdown pass from quarterback Nate Raddatz to receiver Jake Anderson on a fourth-and-goal. Kicker/safety/receiver Dylan Bair’s extra point was good to give the Lakers a 7-0 lead with 2:36 to go in the first quarter.

Prior Lake added onto their lead on the next drive, helped by a big pass from Raddatz to fullback Cam Miller on seam route on the first play of the second quarter to set the Lakers up just outside the red zone. The Lakers then went back to the reliable running game, muscling their way deeper into Saber territory, finishing the drive with a Shaver 3-yard touchdown, who dove across the goal line. Bair’s extra point made the score 14-0 Lakers with 8:48 left in the first half.

The Laker defense held strong the majority of the night, including a huge fourth down stop late in the first half following a Raddatz interception.

The score remained 14-0 at halftime.

Neither team could get much going on the first couple drives as the defenses held strong.

Prior Lake looked like it was going to add onto its lead on its second drive of the third quarter started with 8-yard and 10-yard runs from Shaver as well as a 9-yard run by receiver Parker Ellis. Shaver also had a shifty run on a fourth down-and-1 on Shakopee’s 33-yard line to pick up the first down. Unfortunately for the Lakers, the drive ended a few plays later when Bair got the ball on a reverse and fumbled the ball as he reached the first down marker.

Shakopee, riding the momentum, connected on a big play on the ensuing snap when Saber quarterback David Bigaouette found receiver Nick Katona deep down the field for a 44-yard gain. However, the defense regathered itself and forced a punt near midfield to start the fourth quarter.

Unfortunately for the Lakers, the defense was quickly back on the field after safety/punt returner Austin Gordon couldn’t catch the punt cleanly and the Sabers jumped on the ball to regain possession deep in Prior Lake territory.

The Sabers then used their read-option offense to march their way into the end zone, finished off with a 6-yard touchdown run by Shakopee running back Timmie Blue, who took the intial pitch from Bigaouette. In what turned out to be an important play later, the Shakopee holder was unable to handle the snap on the extra point so the Laker lead stayed at 14-6 with 10:23 to go in the game.

Prior Lake looked to respond two plays into the next drive when Raddatz connected with Ellis deep down the middle of the field for a 36-yard gain just across midfield.

It looked like the drive had stalled a couple plays later until Prior Lake reached into the bag of tricks, calling a fake punt play, a pass from linebacker/running back/punter Sam Emmerich to Gordon who snagged the ball that was just out of the reach of a Shakopee defender and ran down the sideline for a first down.

The offense could not get much going after that either, hindered by a dropped snap. Bair attempted a field goal from the right hash but it was blocked, ending the threat.

Shakopee once again struck back fast with a 55-yard run on a pitch play by Monroe. Emmerich chased Monroe down to save the touchdown for the moment.

Unfortunately for the Lakers, it only momentarily held the Sabers as Bigaouette found reviever Ashton Schriever near the goal line for a 17-yard touchdown, cutting the Prior Lake lead to 14-12 with 3:21 to go in regulation.

The Sabers tried to tie the game with a trick play on the two-point conversion attempt with a reverse pass by Katona. Katona’s pass was just out of Schriever's reach near the pylon, keeping the score 14-12.

The ensuing onside kick attempt was unsuccessful but Shakopee’s defense and use of timeouts gave them one more opportunity in the final minute after a Laker punt.

Bigaouette connected with Katona for a 50-yard gain down to the Laker 30-yard line in the closing seconds.

After a spike to stop the clock, Shakopee missed taking the lead by inches when Bigaouette tried to find Katona in the end zone on a fade route but the ball fell just beyond his reach.

The next two passes fell harmlessly incomplete in the end zone to end the drive and the Lakers took a knee to run out the clock and seal the victory.

Statistically, Shaver led the offense on the ground with 24 carries for 119 yards and a touchdown.

Raddatz completed 6 of 9 passes for 79 yards with a touchdown and an interception.

Ellis had two catches for 40 yards.

Lineman Logan Hennen was the leading tackler with nine as well as three for loss and a sack. Linebacker Carter Effertz had eight tackles, two for loss.

It could very well be the biggest high school football game in the state of Minnesota on Friday night when the Lakers welcome the Wayzata Trojans to Dan Patch Stadium.

Wayzata is led on offense by their rushing attack with running back Christian Vasser. Through two games, Vasser has already gained 301 yards on 49 carries. The Trojans’ other rushing threat, Malaki Jackson, has 79 yards on 15 carries.

Quarterback Thomas Schmidt has completed 21 of 36 passes for 337 yards, five touchdowns and one interception.

Jacob Wildermuth is the Trojans’ top receiver with 12 catches for 217 yards and three touchdowns.

Kickoff vs Wayzata at Dan Patch Stadium on Friday is scheduled for 7 p.m.

Be sure to check back next week for a recap of the Wayzata game as well as a preview of the upcoming matchup against Edina. 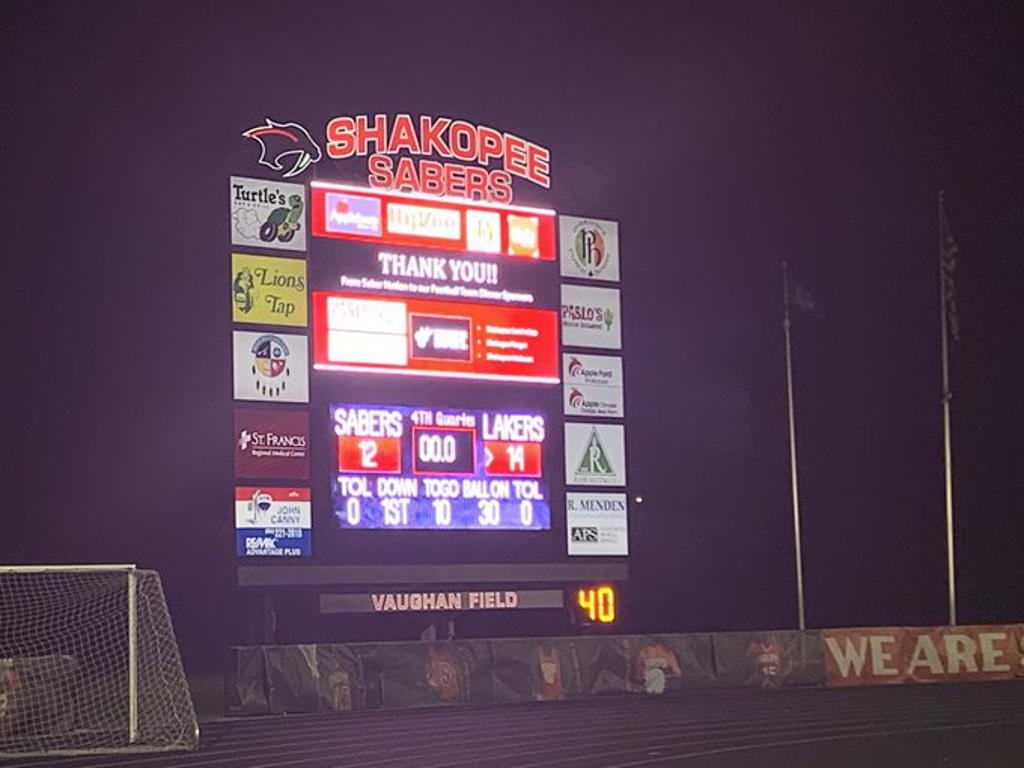