Prior Lake used a strong rushing attack to beat the Irish.

The Prior Lake Lakers scored 28 unanswered points, including 21 in the fourth quarter as they defeated the Rosemount Irish 28-13 at Dan Patch Stadium August 29.

Prior Lake (1-0) came into the game unranked while Rosemount (0-1) entered the contest ranked fourth in the Star Tribune’s Metro Top 10.

Both the Lakers and the Irish offenses had their struggles early on in the game, as typical with season openers. Neither offense could get much going on their first two drives.

The Irish moved the ball into the red zone, however, the Laker defense held strong, as it did all night, holding Rosemount to a field goal. The kick gave Rosemount a 3-0 lead at the end of the first quarter.

Rosemount got another break on the next drive. After the Irish defense forced a three-and-out by the Laker offense, a low snap on a punt couldn’t be handled by punter/running back/linebacker Sam Emmerich, who was tackled at his own 17-yard line for a turnover on downs.

The Laker defense made a stop of their own holding Rosemount to another field goal that made it 6-0 Irish with 9:40 left before halftime.

The Laker offense got moving on the next drive, marching down the field with an 11-play drive where many different players chipped in. Raddatz, Ellis, fullback Cam Miller, receiver Jake Anderson, running back Nick Theis, running back Tyler Shaver and wide receiver/safety Dylan Bair all contributed to the drive.

Unfortunately for the Lakers, their drive stalled near the 10-yard line and kicker Josh Keller’s field goal attempt drifted wide-right, keeping the score 6-0 with 3:01 remaining until halftime.

Prior Lake got another opportunity prior to halftime thanks to a big interception by cornerback Will Jones, who boxed out a Rosemount receiver on a fade route and picked off the pass near the Laker 32-yard line.

A few plays later, in the closing minute of the half, it looked like the Lakers were going to take the lead when Raddatz completed a deep throw down the middle off the field to Ellis, who scampered into the end zone, but the play was called back due to a holding penalty, keeping the score 6-0 Irish at halftime.

The momentum began to shift to the Lakers a few drives into the third quarter. After the Laker defense made a stop, receiver/safety Austin Gordon returned a punt to the Irish 32-yard line and 15 more yards got tacked on due to an interference penalty, setting up the Laker offense at the Rosemount 17-yard line.

The Prior Lake offense capitalized with a couple hard runs from Shaver and then a 6-yard touchdown run by Cam Miller, who weaved his way through the middle of the Irish defense and into the end zone. Keller’s extra point was good, giving Prior Lake its first lead of the game at 7-6 with 5:40 to go in the third quarter.

The Laker defense kept the momentum going on the ensuing drive when linebacker Tanner Newlin stepped in front of a Rosemount receiver and intercepted a pass near midfield and returned in near the Irish 20.

Raddatz made a great play a few plays later. Facing a third down and six at the Irish 16-yard line, Raddatz dropped back to pass but with his receiver covered, scrambled to his left, broke two tackles, spun and went out of bounds just short of the first down marker. He was able to get Rosemount to jump offside on the next play for a first down.

Prior Lake’s defense quickly made a big stop however as a three-and-out with a couple Rosemount penalties followed by a punt gave the Lakers good field position once again as the third quarter ended.

A key 16-yard run by Bair on a reverse set the Lakers up inside the 10-yard line. Emmerich capped the drive with an 8-yard touchdown a couple plays later to increase the lead to 14-6 Lakers with 10:19 to go in the game.

Perhaps the biggest play of the game was made by the Laker defense on the next drive. Facing a third and seven on their own 15-yard line, Rosemount receiver Nick Ratzlaff caught a pass in the flats and was immediately hit by Gordon, who ripped the ball from Ratzlaff’s hands. Cornerback Nick Larson recovered the fumble.

Shaver then took over on the ground for the Laker offense with three consecutive runs of 12 yards, 11 yards and 3 yards respectively, the final being a touchdown to increase the lead to 21-6 with 8:24 to go.

The Laker defense forced a three-and-out on the next drive and Raddatz capped off the win with a 20-yard bootleg touchdown run to seal the game at 28-6 with 3:59 to go.

Rosemount scored a late touchdown to reach the final score of 28-13.

Statistically, Raddatz completed 12 of 16 passes for 69 yards and an interception.

Emmerich and linebacker DJ Doyen led the team in tackles with nine apiece. Lineman Blake Whaley and Gordon each had six tackles with three of Whaley’s being tackles for loss.

Following the Week 1 win, Prior Lake will face a familiar foe and rival in Week 2, the Shakopee Sabers.

Bigaouette only attempted three passes with a single completion to receiver Ashton Schriever.

Prior Lake and Shakopee met in Week 1 last season, a 41-8 Laker win.

The game between the Lakers and the Sabers will be the first in the newly realigned Metro West Subdistrict. Subdistricts in Minnesota high school football take the place of conferences.

Kickoff at Shakopee on Friday is scheduled for 7 p.m.

Be sure to check back next week for a recap of the Shakopee game as well as a preview of the upcoming matchup against Wayzata. 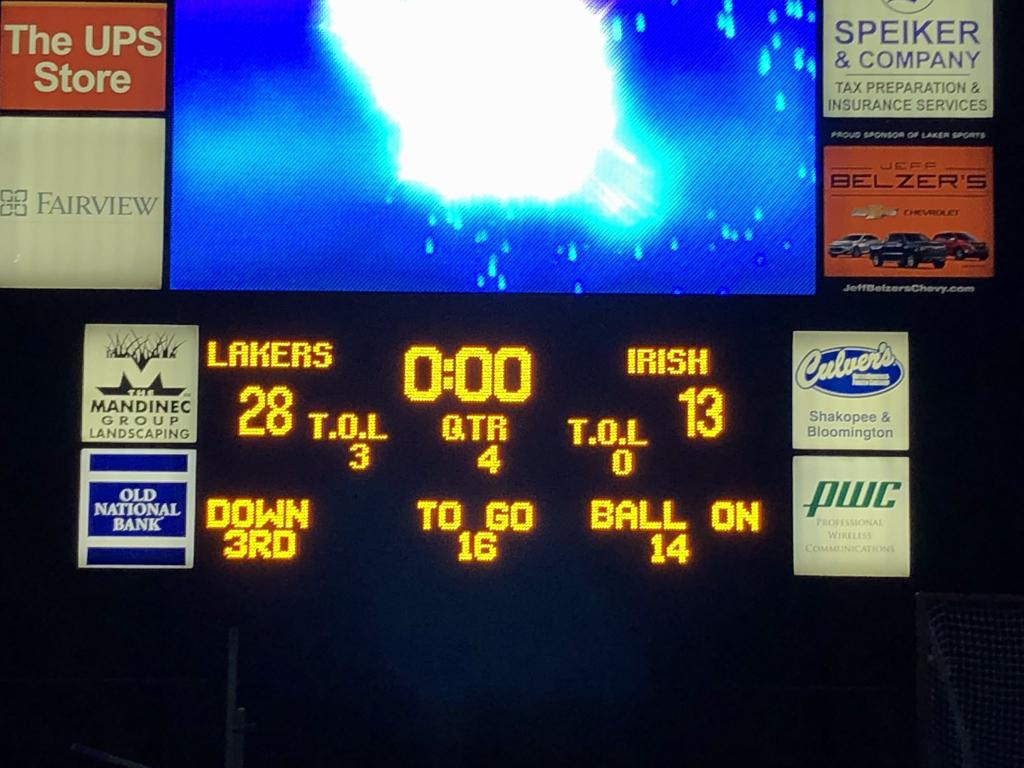